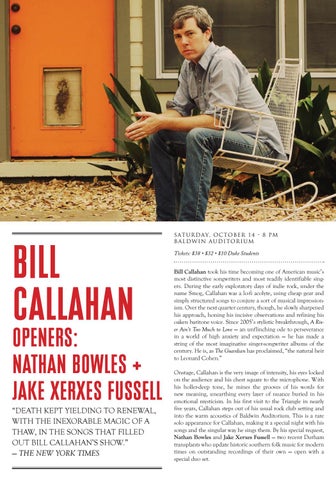 OPENERS: NATHAN BOWLES + JAKE XERXES FUSSELL “DEATH KEPT YIELDING TO RENEWAL, WITH THE INEXORABLE MAGIC OF A THAW, IN THE SONGS THAT FILLED OUT BILL CALLAHAN’S SHOW.” — THE NEW YORK TIMES

Bill Callahan took his time becoming one of American music’s most distinctive songwriters and most readily identifiable singers. During the early exploratory days of indie rock, under the name Smog, Callahan was a lo-fi acolyte, using cheap gear and simply structured songs to conjure a sort of musical impressionism. Over the next quarter century, though, he slowly sharpened his approach, honing his incisive observations and refining his oaken baritone voice. Since 2005’s stylistic breakthrough, A River Ain’t Too Much to Love — an unflinching ode to perseverance in a world of high anxiety and expectation — he has made a string of the most imaginative singer-songwriter albums of the century. He is, as The Guardian has proclaimed, “the natural heir to Leonard Cohen.” Onstage, Callahan is the very image of intensity, his eyes locked on the audience and his chest square to the microphone. With his holler-deep tone, he mines the grooves of his words for new meaning, unearthing every layer of nuance buried in his emotional mysticism. In his first visit to the Triangle in nearly five years, Callahan steps out of his usual rock club setting and into the warm acoustics of Baldwin Auditorium. This is a rare solo appearance for Callahan, making it a special night with his songs and the singular way he sings them. By his special request, Nathan Bowles and Jake Xerxes Fussell — two recent Durham transplants who update historic southern folk music for modern times on outstanding recordings of their own — open with a special duo set. 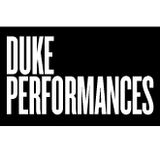