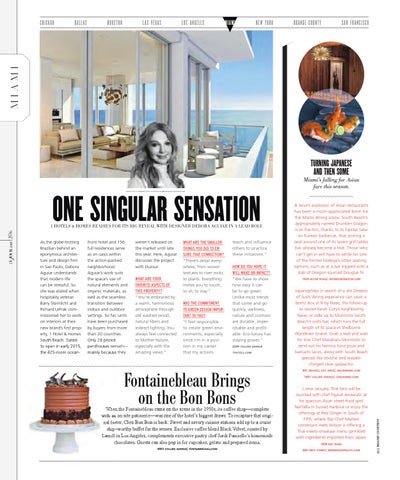 TURNING JAPANESE AND THEN SOME

As the globe-trotting Brazilian behind an eponymous architecture and design firm in Sao Paulo, Debora Aguiar understands that modern life can be stressful. So she was elated when hospitality veteran Barry Sternlicht and Richard LeFrak commissioned her to work on interiors at their new brand’s first property, 1 Hotel &amp; Homes South Beach. Slated to open in early 2015, the 425-room ocean-

front hotel and 156 full residences serve as an oasis within the action-packed neighborhood. Aguiar’s work suits the space’s use of natural elements and organic materials, as well as the seamless transition between indoor and outdoor settings. So far, units have been purchased by buyers from more than 20 countries. Only 28 prized penthouses remain— mainly because they

weren’t released on the market until late this year. Here, Aguiar discusses the project with DuJour. WHAT ARE YOUR FAVORITE ASPECTS OF THIS PROPERTY? “You’re embraced by a warm, harmonious atmosphere through old washed wood, natural fibers and indirect lighting. You always feel connected to Mother Nature, especially with the amazing views.”

WHAT ARE THE SMALLER THINGS YOU DID TO ENSURE THAT CONNECTION? “There’s detail everywhere, from woven textures to river rocks to plants. Everything invites you to touch, to sit, to stay.” WAS THE COMMITMENT TO GREEN DESIGN IMPORTANT TO YOU? “I feel responsible to create green environments, especially since I’m in a position in my career that my actions

teach and influence others to practice these initiatives.” HOW DO YOU HOPE IT WILL MAKE AN IMPACT? ”We have to show how easy it can be to go green. Unlike most trends that come and go quickly, wellness, nature and coziness are durable, imperishable and profitable. Eco-luxury has staying power.” 2399 COLLINS AVENUE 1HOTELS.COM

Fontainebleau Brings on the Bon Bons

When the Fontainebleau came on the scene in the 1950s, its coffee shop—complete with an on-site patisserie—was one of the hotel’s biggest draws. To recapture that original luster, Chez Bon Bon is back. Sweet and savory cuisine stations add up to a cruise ship–worthy buffet for the senses. Exclusive coffee blend Black Velvet, roasted by Lamill in Los Angeles, complements executive pastry chef Jordi Panisello’s homemade chocolates. Guests can also pop in for cupcakes, gelato and prepared items. 4441 COLLINS AVENUE; FONTAINEBLEAU.COM

A recent explosion of Asian restaurants has been a much-appreciated boon for the Miami dining scene. South Beach’s appropriately named Drunken Dragon is so fire-hot, thanks to its hipster take on Korean barbecue, that scoring a seat around one of its seven grill tables has already become a feat. Those who can’t get in will have to settle for one of the former bodega’s other seating options, such as at a bar topped with a slab of Oregon-sourced Douglas fir. 1424 ALTON ROAD; DRUNKENDRAGON.COM

Japanophiles in search of a Jiro Dreams of Sushi dining experience can savor a bento box at N by Naoe, the follow-up to owner Kevin Cory’s neighboring Naoe, or sidle up to Morimoto South Beach’s sushi bar, which runs the full length of its space in Shelborne Wyndham Grand. Grab a seat and wait for Iron Chef Masaharu Morimoto to send out his famous tuna pizza and hamachi tacos, along with South Beach specials like ceviche and wasabicharged clear gazpacho. 661 BRICKELL KEY DRIVE; NAOEMIAMI.COM 1801 COLLINS AVENUE; SHELBORNE.COM

1 HOTELS &amp; HOMES READIES FOR ITS BIG REVEAL WITH DESIGNER DEBORA AGUIAR IN A LEAD ROLE