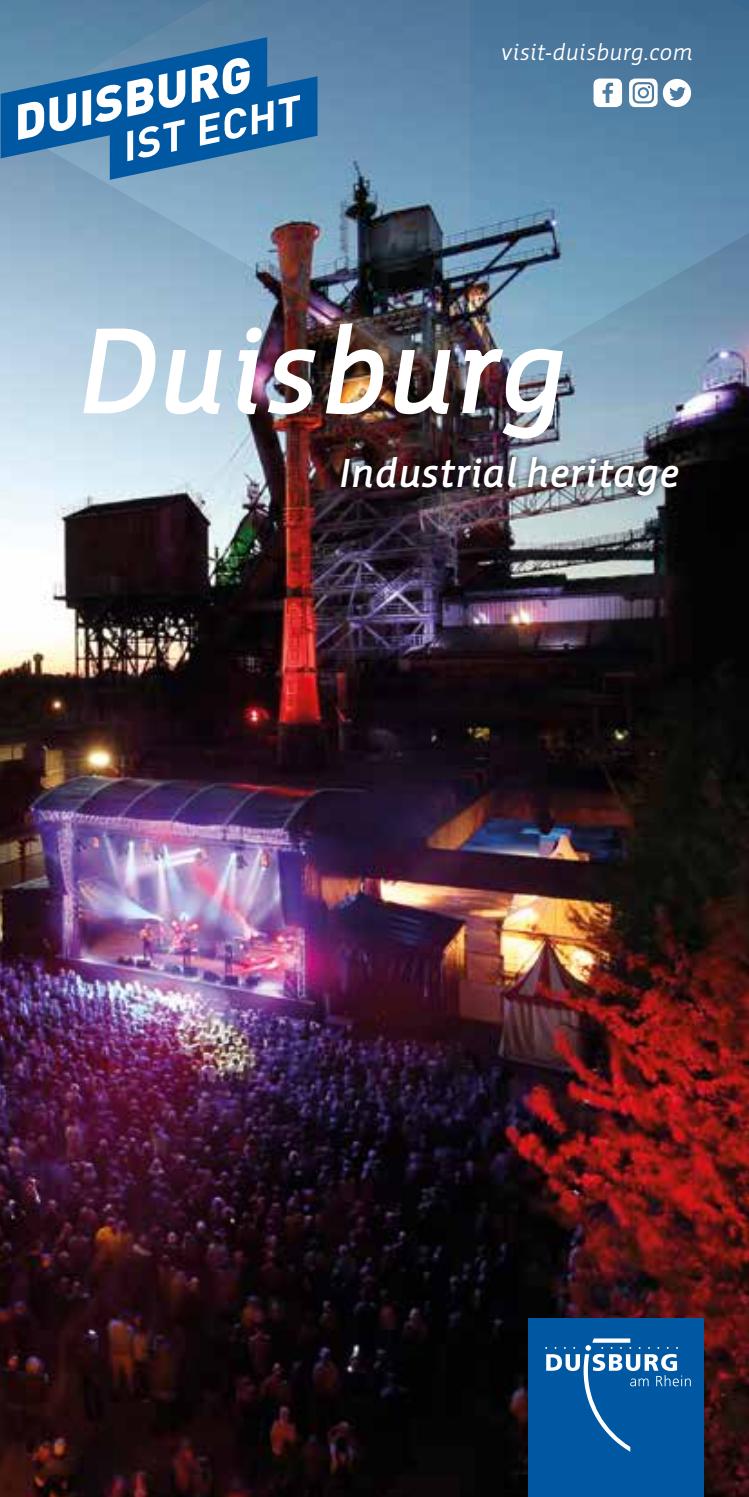 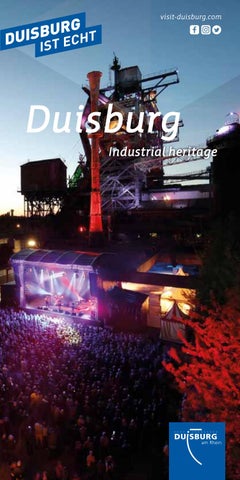 THE FASCINATION OF INDUSTRIAL HERITAGE Industrial heritage is inspiring! Every year, millions of people flock to the former collieries and ironworks that are now used in a completely different way. This is where piano festivals and rock nights are held, along with sports competitions, cultural spectacles and unusual trade fairs. Photographers, nature lovers, families and company employees all come here. They travel from Scandinavia, Asia and all over the word. British newspaper The Guardian has even called the Landscape Park Duisburg Nord one of the finest parks in the world. Thank you for also taking an interest. We warmly welcome you to the highlights of industrial her­ itage in Duisburg, the city of water and fire. Your Duisburg Tourist Information Team

The fascination of industrial heritage

LANDSCAPE PARK DUISBURG NORD The Landscape Park Duisburg Nord (Landschaftspark Duisburg-Nord) is unique! British newspaper The Guardian includes it in its list of the ten finest parks in the world. On an area covering 200 hectares, it combines culture and nature, sports and festivals, sociability and adventure. It is a recreational park, film set, trade fair hall, playground, open-air cinema, diving centre, climbing course and much more besides. More than one million visitors come from all over the world every year to marvel at this unique pearl of industrial heritage. The park is open day and night and entry is free.

BOOK YOUR TICKETS NOW! For guided tours or events: www.visit-duisburg.com

Furnace tapping at the Meiderich ironworks, 1953

IN THE PAST From 1901 until its closure in 1985, the former Thyssen ironworks produced around 37 million tonnes of pig iron in five furnaces. As many as 3,500 people were once employed here.

INNER HARBOUR Take a stroll along the water’s edge, past diverse bistros and restaurants, museums in converted former warehouse buildings, secluded canals, delightful swans and cormorants, and a yacht harbour at the foot of the spectacular modern architecture of the ‘Five Boats’. Duisburg’s Inner Harbour, located directly behind the town hall, has all of this to offer. In recent years it has become one of the most popular destinations in the region.

The Inner Harbour used to be known as the Ruhr region’s breadbasket due to the large quantities of grain that were handled here. With the decline of the flour mills at the end of the 1960s came the inevitable decline of Duisburg’s Inner Harbour. Work began to transform the site in the mid-1990s based on plans by the British star architect Sir Norman Foster.

TIGER &amp; TURTLE It became a place favourite among photographers from all over the world within the shortest space of time! The visual artists used their cameras to catapult it onto the cover pages of countless glossy brochures. Creative agencies shot exciting video clips with it and the marketing strategists at the software giant Microsoft chose it as a start screen image that delighted people worldwide. The walkable steel sculpture known as Tiger &amp; Turtle is pretty much the supermodel of industrial heritage. Yet it is worth climbing to the top even without a camera, because the view is breathtaking.

FACTS The Tiger &amp; Turtle – Magic Mountain sculpture opened in November 2011 and is based on the shape of a roller coaster. The work of art was created by Heike Mutter and Ulrich Genth as part of the Ruhr.2010 European Capital of Culture initiative. At night, 880 LED lights in the handrail light up the sculpture.

HĂźttenheim/Angerhausen around 1965: The site on which the slag heap was later created and where Tiger &amp; Turtle now stands was still fallow land back then (surrounded by trees in the photo).

The landmark visible for miles around was built on a former slag heap located to the south of Duisburg. The slag heap, named after the local historian Heinrich Hildebrand, was primarily formed from the waste produced by the former zinc works, which was closed in August 2005.

MUSEUM DER DEUTSCHEN BINNENSCHIFFFAHRT The Museum der Deutschen Binnenschifffahrt is a key location on the Industrial Heritage Trail and houses Germany’s biggest collection of exhibits related to shipping on rivers, canals and lakes. Shipping history from the Stone Age to the present day: detailed replica models of ships, ports and shipyards and historical artefacts. The museum ships are located on the Hafenmund (near the Schifferbörse). Marvel at the engineering and see it up-close, including the last paddle tug on the Rhine, Oscar Huber, the steam-powered bucket dredger, Minden, and the crane ship, Fendel 147. This is where history comes to life.

The Tjalk, a historical cargo ship

The current museum is housed in a former art nouveau swimming pool. It opened in 1910 and had two swimming halls – one for men and one for women. The house rules were strict. One particular rule stated, for example: ‘Operations to remove corns may not be performed on the premises.’

HOUSING ESTATES Typical housing estates for workers can be found in almost every district of Duisburg. Most were built during the industrialisation boom at the end of the 19th century and start of the 20th century. The desperately needed workers were enlisted with the help of the homes, which would be considered incredibly attractive in any era. Estates were built for steelworkers, miners and railway employees. Most of them now enjoy listed status.

RAILWAY LINES Many railway lines along, which works trains once ran, are now closed. They are frequently transformed into cycle paths and are therefore especially popular among cyclists.

ALSUMER BERG This former rubbish dump by the Rhine is now covered with greenery and surrounded by industry. It affords a breathtaking view of the biggest steelmaking location in Europe. Along with the railway lines, the Alsumer Berg is also very popular among cyclists.

FIND OUT MORE ABOUT CYCLING www.duisburg-tourismus.de

INDUSTRIAL HERITAGE NEARBY There are also many industrial monuments beyond the city limits of Duisburg that are definitely worth visiting. Here is just a small selection.

The Gasometer Oberhausen never ceases to amaze visitors with spectacular and sensational exhibitions and installations. On the roof, at a height of 117 metres, is a viewing platform. Distance from Duisburg city: 15.7 km www.gasometer.de

‘Das Geleucht’ is an original observation tower in the shape of a miner’s lamp. It affords breathtaking views from the Rheinpreussen slag heap in Moers. Distance from Duisburg city: 14.7 km www.das-geleucht.de

Zollverein has been on the UNESCO World Heritage list since 2001. Just like the Landscape Park Duisburg Nord, it features a wide range of attractions following its conversion. Distance from Duisburg city: 26.8 km www.zollverein.de

INDUSTRIAL HERITAGE TRAIL From Duisburg to Dortmund to Hamm, there are industrial monuments that are now enjoying a new lease of life in a variety of ways. The highlights are summarised in the Industrial Heritage Trail. www.route-industriekultur.ruhr

LIVING INDUSTRY Despite the steel crisis and structural change, Duisburg remains one of the worldâ&amp;#x20AC;&amp;#x2122;s leading locations for iron and steel production. The city of water and fire produces around half of all the pig iron produced in Germany and a third of the crude steel. Traditional companies such as thyssenkrupp Steel Europe AG and HĂźttenwerke Krupp Mannesmann GmbH continue to shape the face of our city to this day. 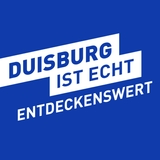 Industrial heritage is inspriring! Every year, millions of people flock to the former collieries and ironworks that are now used in a completely different way. Discover highlights of industrial heritage like Landscape Park Duisburg or the sculpture Tiger & Turtle.