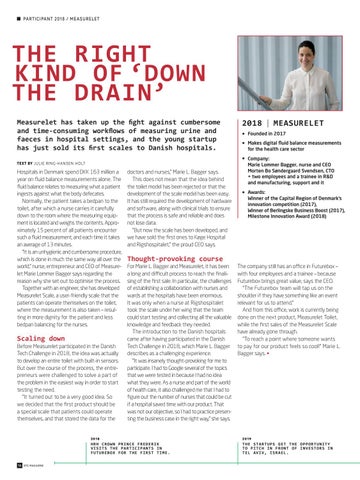 THE RIGHT KIND OF ‘DOWN THE DRAIN’ Measurelet has taken up the fight against cumbersome and time-consuming workflows of measuring urine and faeces in hospital settings, and the young startup has just sold its first scales to Danish hospitals.

Hospitals in Denmark spend DKK 163 million a year on fluid balance measurements alone. The fluid balance relates to measuring what a patient ingests against what the body defecates. Normally, the patient takes a bedpan to the toilet, after which a nurse carries it carefully down to the room where the measuring equipment is located and weighs the contents. Approximately 15 percent of all patients encounter such a fluid measurement, and each time it takes an average of 13 minutes. ”It is an unhygienic and cumbersome procedure, which is done in much the same way all over the world,” nurse, entrepreneur and CEO of Measurelet Marie Lommer Bagger says regarding the reason why she set out to optimise the process. Together with an engineer, she has developed Measurelet Scale, a user-friendly scale that the patients can operate themselves on the toilet, where the measurement is also taken – resulting in more dignity for the patient and less bedpan balancing for the nurses.

Before Measurelet participated in the Danish Tech Challenge in 2018, the idea was actually to develop an entire toilet with built-in sensors. But over the course of the process, the entrepreneurs were challenged to solve a part of the problem in the easiest way in order to start testing the need. ”It turned out to be a very good idea. So we decided that the first product should be a special scale that patients could operate themselves, and that stored the data for the

doctors and nurses,” Marie L. Bagger says. This does not mean that the idea behind the toilet model has been rejected or that the development of the scale model has been easy. It has still required the development of hardware and software, along with clinical trials to ensure that the process is safe and reliable and does not lose data. ”But now the scale has been developed, and we have sold the first ones to Køge Hospital and Rigshospitalet,” the proud CEO says.

For Marie L. Bagger and Measurelet, it has been a long and difficult process to reach the finalising of the first sale. In particular, the challenges of establishing a collaboration with nurses and wards at the hospitals have been enormous. It was only when a nurse at Rigshospitalet took the scale under her wing that the team could start testing and collecting all the valuable knowledge and feedback they needed. The introduction to the Danish hospitals came after having participated in the Danish Tech Challenge in 2018, which Marie L. Bagger describes as a challenging experience. ”It was insanely thought-provoking for me to participate. I had to Google several of the topics that we were tested in because I had no idea what they were. As a nurse and part of the world of health care, it also challenged me that I had to figure out the number of nurses that could be cut if a hospital saved time with our product. That was not our objective, so I had to practice presenting the business case in the right way,” she says.

The company still has an office in Futurebox – with four employees and a trainee – because Futurebox brings great value, says the CEO. ”The Futurebox team will tap us on the shoulder if they have something like an event relevant for us to attend.” And from this office, work is currently being done on the next product, Measurelet Toilet, while the first sales of the Measurelet Scale have already gone through. ”To reach a point where someone wants to pay for our product feels so cool!” Marie L. Bagger says. ∙

THE STARTUPS GET THE OPPO RTUNITY TO PITCH IN FRONT OF INVE STORS IN TEL AVIV, ISRAEL. 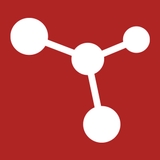