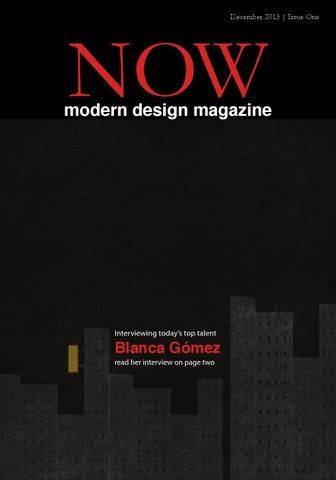 the arrival of Graham Myers

Crown the King read up on his rise to stardom

with the year nearly in the can

2013 Trends read the best of what was

Interview: Blanca Gómez Blanca is a Graphic Designer and Illustrator based in Madrid, Spain. You may remember her work as featured on Grain Edit’s on-going poster pick series. We took some time to talk to Blanca about her work and creative process. We hope you’ll enjoy it. Q: Where are you from originally? A: I am originally from Madrid and that is where I currently reside. I am always saying that I’d like to move somewhere else for at least

a while, but here I am. I suppose underneath it all it isn’t so bad. Q: Tells us a bit about your art/ design background. Where did you study? A: When I was little I would draw all day long like many kids do and my parents enrolled me in a painting academy. I would always say that I wanted to be a painter, but as I grew older I didn’t see it as a feasible option and the idea faded. cont’d on next page

I had always considered drawing a hobby, but never imagined it as one that could earn me a living.

I would always say that I wanted to be a painter, but as I grew older I didn’t see it as a feasible option and the idea faded.

Interview: Blanca Gómez Cont’d When it was time to head to college I wasn’t clear what I wanted to do with my life. earn me a living. Instead I chose to study Publicity because I thought it would lend itself to creativity and aide in my professional development, but I soon realized that Publicity was not for me. I continued my studies, but explored other alternatives like photography and film through my fourth year. It was in Milan that I became interested in graphic design. I remember attending an eye-opening exhibition of Milton Glaser’s work and somehow finally figuring out what I should do.

When I returned to Madrid I enrolled in evening classes at a design school while I wrapped up my publicity studies. I was in classes all day until 11 P.M. and it was very exhausting but well worth it in the end. One month after finishing college and my design coursework I began working for a small graphic design studio. Q: When did Cosas Minimas begin and how has it grown? A: Cosas Minimas got its start several years ago in a very curious way. I was working for another graphic design studio at the time and was in the habit of constantly drawing on post-its. Most of the drawings ended up in my wastebasket and my boss would tell me that I should do something with those drawings, but I never paid much attention.

One day he simply told me that he had chosen a name for my website and purchased it for me. So it just naturally morphed out of what was once merely a hobby at work. What was initially meant to be a personal project gradually and naturally turned into a professional project. As time went on I began dedicating more time and effort into Cosas Minimas. That is how my first commissions and collaborations came about, always via the web, until finally my hobby became my primary job. It’s not like I had a plan or predetermined objective, it just happened. Thank you for your time, Blanca!

Best Modern Design Tips When we talk about designing, it can be anything. A best graphic design is something you want for the project you do so that your clients can easily get attracted. May whatever design it is, for instance, it can be a logo design or web design etc but it has to be unique, simple and striking. However, there are people who also prefer going with the modern graphic design. There are even companies who hire top graphic designers to make the best graphic design. However, there are certain things that you must know about the modern graphic designs. Let us look as to what they are. Modern Graphic Design – Tips Whether you are into designing business cards, pamphlets, websites, logos, magazine covers etc with some modern graphic designs, one has to understand about your audience first. Just throwing up together some stock photos, graphics and text will never work in today’s market. You need to learn the trading skills and enhance the way you want. Let us start by exploring the color palettes. Color palettes play a very important role when it comes to modern graphic design. cont’d on next page

“Whether you are into designing business cards, pamphlets, websites, logos, magazine covers etc with some modern graphic designs, one has to understand about your audience first.”

You can some sort of graphics like fade in and out. Make sure the font is appealing and clear to understand. Shadows are yet another best thing that does wonders to your designing. Even though these are simple to hear, these ultimate ones will make your designing come out great. It will look as if a professional has created it. As you got everything in order, you need to pace back and then take a thorough look as to what you have literally created. Checking this way will help you to know about some errors as well. You will know as to what is wrong and what is not.

Check if it has the correct colors or they need to be changed. Check if the colors are blending with each other properly.

“Shadows are yet another best thing that does wonders to your designing.” In addition, you need to check if there is something, which looks odd in your design. If so, correct them immediately.

The Funny Page A place to have a laugh

Graham Myers has officially arrived... Welcome to the modern era and the only thing missing is the king. Nevermind. In early November, we announced the winner of our King of Design for the Modern Era contest winner. Graham Myers took the cake in a fashion similar to the hamburglar. The much adored child prodigy won the contest with his groundbreaking campain focused on rebranding the windmill powerhouse, Allied. Upon hearing of his attempt, Allied flew Myers into their Houston headquarters and rolled out the red carpet. Myers told the us that he “wouldn’t have expected anything less from such a classy organization.”

It was reported that Allied bought the 21-year-old a hamburger and a $50 giftcard to Exxon but refused to buy him a Coca Cola Classic that he saw in a vending machine outside a boarded-up Rite Aid. The rest of his two hour stay with the company was spent in Allied’s lounge where all the company’s employees gather to “brainstorm for tomorrow because they want to chill today.” “All in all, I can’t complain,” Myers reflected. “Tomorrow, I plan to buy a Coca Cola Classic from the local Exxon with the giftcard.” Coca Cola refused to comment.

to counter its hand-drawn rival,” says Jonny Wan. “A combination of minimalism, simplifying and experimentation with basic shape and colour have been dominating editorial work lately. I predict this will only get stronger in 2013 with the rise in infographics and people catching on to the minimalist trend doing the rounds at the moment.” From Print to Digital Craft blog Mollie Makes launched an iPad-only magazine, Gathered, earlier this year. Luke O’Neill, launch graphic design art editor of Computer Arts Collection magazine, is an experienced graphic designer, who acknowledges the traditional editorial graphic designer’s role has changed significantly in the last year, with print revenue declines and digital magazines becoming the norm.

2013 Graphic Design Trends When some creatives hear the word ‘trend’ they back into a corner, refusing to acknowledge these ‘trends’ dictate what they do. And it’s true that following trends consciously can be a bad thing to do. After all, if you’re not innovating and pushing yourself, your own work will never reach its full potential.

of getting better client work.

But at the end of the day, clients want your work to be at the height of trends - so having a handle on what is going to be a popular style, or way of working over the next year will only improve your chances

Cover illustration for ‘The Master’ issue of Little White Lies by Siggi Eggertsson (above).

We’ve asked a number of top creative professionals, from animators to illustrators to app developers and editorial graphic designers, to see what they predict for 2013. Geometric Graphic Design

“Recently digital graphic illustration has been fighting back

over the print magazine to a screen format, which unfortunately is often the case. “From an aesthetic point of view I foresee graphic design for iPad and screen formats getting back to basics and the fundamentals of graphic design, the relationship between text and image. Navigation and actual content will take prominence over whizz-bang effects that ultimately do little to enhance the experience and simply bloat the app.”

Stripping it back: Simplicity in Graphic Design In the last year, eBay, Microsoft and others stripped back their logos to the bare essentials. “A lot of brands redesigned their logos this year to be extremely minimal,” says Lee Crutchley. “Microsoft, ebay, Starbucks, and others have done it. I think a lot of that was to make people talk about the brand, as well as being a stylistic trend.”

2013 Graphic Design Trends Cont’d Whereas a heavily stylised logo tends to have more influence over the rest of the graphic design.” It seems as though 2012 has kickstarted a KISS - Keep it Simple, Stupid - philosophy amongst brands, which can only be a good thing. With digital magazines pushing their way to the forefront of publishers’ minds, you’d think that this would be bad news for print. But it’s not all going to be gloom and doom, according to Luke O’Neill. “In 2013, I think there will be continued experimentation with print techniques and innovative finishes to really enhance the experience for the consumer who still likes to hold something in their hands,” he says. Just look at some of the fashion and photography tomes appearing right now such as Hunger and indeed Luke O’Neill’s own Computer Arts Collection. In 2013 we will probably see lower print runs, but we’ll also see more luxury magazines that are a celebration of print.