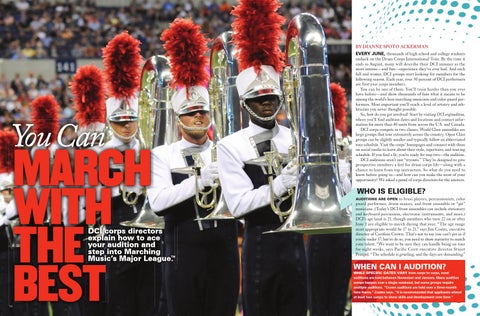 BY DIANNE SPOTO ACKERMAN EVERY JUNE, thousands of high school and college students embark on the Drum Corps International Tour. By the time it ends in August, many will describe their DCI summer as the most intense—and fun—experience they’ve ever had. And each fall and winter, DCI groups start looking for members for the following season. Each year, over 50 percent of DCI performers are first-year corps members. You can be one of them. You’ll train harder than you ever have before—and show thousands of fans what it means to be among the world’s best marching musicians and color guard performers. Most important you’ll reach a level of artistry and athleticism you never thought possible. So, how do you get involved? Start by visiting DCI.org/audition, where you’ll find audition dates and locations and contact information for more than 40 units from across the U.S. and Canada. DCI corps compete in two classes. World Class ensembles are large groups that tour extensively across the country. Open Class groups can be slightly smaller and typically follow an abbreviated tour schedule. Visit the corps’ homepages and connect with them on social media to learn about their style, repertoire, and touring schedule. If you find a fit, you’re ready for step two—the audition. DCI auditions aren’t just “tryouts.” They’re designed to give prospective members a feel for drum corps life—along with a chance to learn from top instructors. So what do you need to know before going in—and how can you make the most of your opportunity? We asked a panel of corps directors for the answers.

MARCH WITH THE BEST

AUDITIONS ARE OPEN to brass players, percussionists, color guard performer, drum majors, and front ensemble or “pit” musicians. (Today’s DCI front ensembles can include stationary and keyboard percussion, electronic instruments, and more.) DCI’s age limit is 21, though members who turn 22 on or after June 1 are eligible to march during that year. “The age range most appropriate would be 17 to 21,” says Jim Coates, executive director of Carolina Crown. That’s not to say you can’t get in if you’re under 17; but to do so, you need to show maturity to match your talent. “We want to be sure they can handle being on tour for eight weeks, says Pacific Crest executive director Stuart Pompel. “The schedule is grueling, and the days are demanding.”

WHEN CAN I AUDITION? WHILE SPECIFIC DATES VARY from corps to corps, most auditions are held between November and January. Many audition camps happen over a single weekend, but some groups require multiple auditions. “Crown auditions are held over a three-month time frame,” Coates says. “It is recommended that applicants attend at least two camps to show skills and development over time.” 15 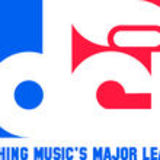 You Can March With the Best!

Each season, thousands of performers take their first steps with a Drum Corps International group. Here’s how you can be one of them.

You Can March With the Best!

Each season, thousands of performers take their first steps with a Drum Corps International group. Here’s how you can be one of them.