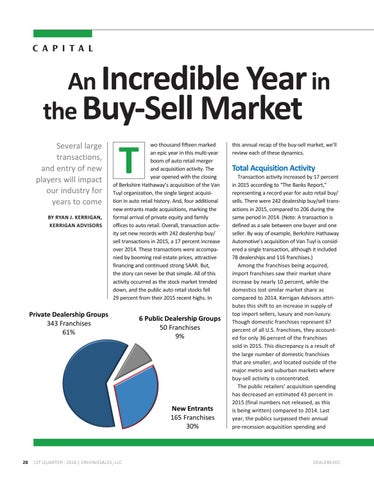 An Incredible Year in the Buy-Sell Market Several large transactions, and entry of new players will impact our industry for years to come BY RYAN J. KERRIGAN, KERRIGAN ADVISORS

wo thousand fifteen marked an epic year in this multi-year boom of auto retail merger and acquisition activity. The year opened with the closing of Berkshire Hathaway’s acquisition of the Van Tuyl organization, the single largest acquisition in auto retail history. And, four additional new entrants made acquisitions, marking the formal arrival of private equity and family offices to auto retail. Overall, transaction activity set new records with 242 dealership buy/ sell transactions in 2015, a 17 percent increase over 2014. These transactions were accompanied by booming real estate prices, attractive financing and continued strong SAAR. But, the story can never be that simple. All of this activity occurred as the stock market trended down, and the public auto retail stocks fell 29 percent from their 2015 recent highs. In

this annual recap of the buy-sell market, we’ll review each of these dynamics.

Transaction activity increased by 17 percent in 2015 according to “The Banks Report,” representing a record year for auto retail buy/ sells. There were 242 dealership buy/sell transactions in 2015, compared to 206 during the same period in 2014. (Note: A transaction is defined as a sale between one buyer and one seller. By way of example, Berkshire Hathaway Automotive’s acquisition of Van Tuyl is considered a single transaction, although it included 78 dealerships and 116 franchises.) Among the franchises being acquired, import franchises saw their market share increase by nearly 10 percent, while the domestics lost similar market share as compared to 2014. Kerrigan Advisors attributes this shift to an increase in supply of top import sellers, luxury and non-luxury. Though domestic franchises represent 67 percent of all U.S. franchises, they accounted for only 36 percent of the franchises sold in 2015. This discrepancy is a result of the large number of domestic franchises that are smaller, and located outside of the major metro and suburban markets where buy-sell activity is concentrated. The public retailers’ acquisition spending has decreased an estimated 43 percent in 2015 (final numbers not released, as this is being written) compared to 2014. Last year, the publics surpassed their annual pre-recession acquisition spending and

DealerExec is published quarterly by DrivingSales, LLC featuring executive resources for automotive retail leaders covering dealership Brands, Capital and People, and a quarterly ranking of dealership vendors as rated by dealers themselves. Within the first issue of each year, DealerExec announces the annual winners of the the Dealer Satisfaction Awards from several Vendor Rating categories. 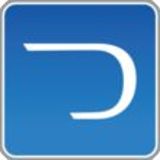