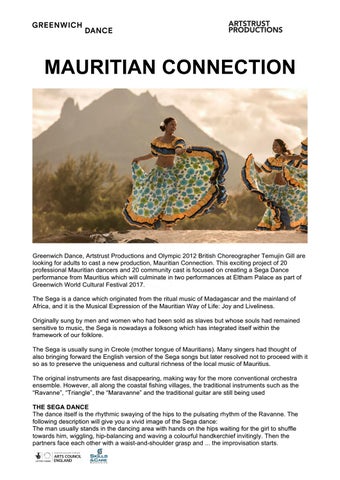 Greenwich Dance, Artstrust Productions and Olympic 2012 British Choreographer Temujin Gill are looking for adults to cast a new production, Mauritian Connection. This exciting project of 20 professional Mauritian dancers and 20 community cast is focused on creating a Sega Dance performance from Mauritius which will culminate in two performances at Eltham Palace as part of Greenwich World Cultural Festival 2017. The Sega is a dance which originated from the ritual music of Madagascar and the mainland of Africa, and it is the Musical Expression of the Mauritian Way of Life: Joy and Liveliness. Originally sung by men and women who had been sold as slaves but whose souls had remained sensitive to music, the Sega is nowadays a folksong which has integrated itself within the framework of our folklore. The Sega is usually sung in Creole (mother tongue of Mauritians). Many singers had thought of also bringing forward the English version of the Sega songs but later resolved not to proceed with it so as to preserve the uniqueness and cultural richness of the local music of Mauritius. The original instruments are fast disappearing, making way for the more conventional orchestra ensemble. However, all along the coastal fishing villages, the traditional instruments such as the “Ravanne”, “Triangle”, the “Maravanne” and the traditional guitar are still being used THE SEGA DANCE The dance itself is the rhythmic swaying of the hips to the pulsating rhythm of the Ravanne. The following description will give you a vivid image of the Sega dance: The man usually stands in the dancing area with hands on the hips waiting for the girl to shuffle towards him, wiggling, hip-balancing and waving a colourful handkerchief invitingly. Then the partners face each other with a waist-and-shoulder grasp and ... the improvisation starts.

It starts with a gentle swaying, to a slow and solemn tune, which gradually rises and you find the dancers swaying with animated movements to keep pace with the ever-increasing tempo. The beat creeps inside you and as your body responds to the rhythm, you are carried to heights of ecstasy, generating a vibrating force that shakes the "lead" off your feet and inspires you to a highspirited and free way of dancing. Tiring perhaps, but exhilarating! Never mind if your movement does not follow the rhythm ... Simply carry on dancing and you will be amazed how rhythm and movements synchronize afterwards. SIGNIFICANCE OF SEGA FOR MAURITIANS The Sega is a cry from the soul trying to transcend the miseries and heartaches of life, while at the same time expressing the universal human desire for joy and happiness. It tells the joys and sorrows of the peasants and the fishing folks. It is a nostalgic heritage of the villagers. Its beats, gripping in intensity, now provide entertainment to Mauritians of all walks of life in towns and villages. Today the Sega and its beat are a part of every Mauritian's life. GET INVOLVED It is completely free to participate and no previous experience is required, just your enthusiasm and commitment. You will be working with the local Mauritian community in Greenwich, learning their culture and performing their dance. The show will be c.15min in length, and we will provide your costume. This project is for you if: you are interested in dance and performance you are aged 18+ you are dedicated and can commit to attending the rehearsals and performances To apply, email your contacts details and explain briefly why you would like to be part of this project to Martin Collins by Saturday 28 May: m.collins@artstrust.co.uk All rehearsals will take place at Charlton Athletic Football Club, The Valley, Floyd Rd, London, SE7 8BL. The performance will be at Eltham Palace (16 July) Schedule: WHAT Workshop

About Greenwich Wold Cultural Festival: Greenwich World Cultural Festival returns to Eltham as part of Royal Greenwich Festivals for a eighth time inviting everyone to a laid-back family afternoon of dance, theatre, music, art and circus from around the world. Presented by Greenwich Dance, this extraordinary celebration of local communities and fantastic artists is not to be missed. With one-day-only free entry to the grounds, everyone is welcome for an unforgettable afternoon at one of Greenwich’s most iconic locations. Councillor Miranda Williams, Royal Borough of Greenwich Cabinet Member for Culture and Creative industries said: “Many of the country's best loved and most experienced cultural groups are based in Royal Greenwich including Greenwich Dance. Along with their many classes and workshops they have brought dance into the streets and open spaces of Royal Greenwich. Forming part of the Royal Greenwich Festivals: The Greenwich World Cultural Festival, once again will offer a vibrant celebration of dance to residents of all ages. We are proud to be a supporter of Greenwich Dances and look forward to working with them on future projects.” About Temujin Gill Temujin is resident artist at Greenwich Dance, an ex-Jiving Lindy Hopper, founder of Temujin Dance and now Artistic Director of Grounded Movement.Through his work Temujin has been committed to bringing dance to all sectors of the community working with professional performers, educators, the young and inexperienced of all ages. Testament to this committment and his ability came with the amazing honor he received when asked to be on Danny Boyle’s award winning London 2012 Creative Team to choreograph the NHS section of the Olympics Opening Ceremony. Other credits include: working with Fin Walker and Daniel Radcliffe in Equus at the Gielgud Theatre; the Lindy Hop extravaganza for Ray Davies’ Meltdown festival at the Royal Festival Hall; presenting work at the Queen Elizabeth Hall and Sadlers Wells and collaborations at the Young Vic and more recently Movement Director on Pia Furtado’s production of Titus Andronicus in association with Bold Tendancies. His diverse background in dance culminates in expressive, engaging and rhythmically driven work rooted in a blend of Classic Jazz dance forms, Breakin', Capoeira and Contact Improvisation. He believes dance should be challenging, accessible and fun to experience and observe, and aims to highlight the relevance of heritage, community, change and our individual uniqueness https://temujingill.yolasite.com

About Greenwich Dance: Greenwich Dance is a landmark home for dance and movement. We welcome our guests - artists, participants and communities - to explore, create, participate in and experience dance. In order to create space for dance to transform lives we encourage innovation and experimentation between home-grown and international artists and local communities where people can move and be moved. Greenwich Dance is a leader in participatory dance and performance aiming to share our practice nationally through the instigation of the Network for Participatory Dance Performance and with international partners. Highlights of our participatory projects are; Common Dance (2009), Crossroads (2012), Hercules (2015) and The Deluge (2015). www.greenwichdance.org.uk

About Artstrust Productions: Artstrust are the producers of Dance for Stage and Screen, working with the BBC, Sky Arts and Channel 4; the most recent production with Boy Blue Entertainment and Danny Boyle for BBC2. Moreover, have been a producing partner of Greenwich World Cultural Festival for the past four years. Other productions include; Running Wild (2016); Cubitt Session, a 3-week Opera Festival at Kings Cross, London; Bouncing Cats and Boom Boom Pups (2015-17); The Magic Paintbrush (2016-17). Since 2006 Artstrust has created an environment where ideas, careers, creative partnerships and diversity of contemporary dance practice can survive and flourish. Artstrust works locally, nationally and internationally to identify, develop and present breakthrough independent dancers and choreographers and provide a hub where independent artists can connect to a professional, creative and interactive dance network in which they can edify their work. www.artstrust.co.uk About Skills and Care Skills & Care Greenwich is a registered charity, predominantly working with the older people within the Royal Borough of Greenwich. Since its inception in July 2013, we have successfully delivered a range of projects that have helped over 2000 service users. Skills & care Greenwich is a winner of Civic Award 2016 and Winner of Social Care Award 2016/17 in "Best Charitable Older People Initiative - South East England" category. Our mission is to improve the health and well-being of people in Greenwich by delivering the high-quality services in the community. We strive to make a real and lasting difference to the quality of life of local people, helping the community to CONNECT, be more ACTIVE, take time to REFLECT, keep on LEARNING, GIVE and CELEBRATE more often and SUPPORT each other. Our targeted projects promote community cohesion and increase the health & well-being of local people http://www.skillsandcare.co.uk