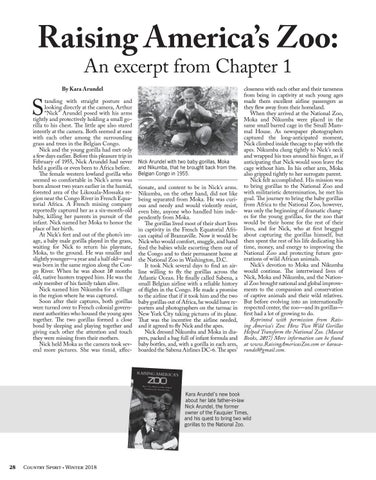 tanding with straight posture and looking directly at the camera, Arthur “Nick” Arundel posed with his arms tightly and protectively holding a small gorilla to his chest. The little ape also stared intently at the camera. Both seemed at ease with each other among the surrounding grass and trees in the Belgian Congo. Nick and the young gorilla had met only a few days earlier. Before this pleasure trip in February of 1955, Nick Arundel had never held a gorilla or even been to Africa before. The female western lowland gorilla who seemed so comfortable in Nick’s arms was born almost two years earlier in the humid, forested area of the Likouala-Mossaka region near the Congo River in French Equatorial Africa. A French mining company reportedly captured her as a six-month-old baby, killing her parents in pursuit of the infant. Nick named her Moka to honor the place of her birth. At Nick’s feet and out of the photo’s image, a baby male gorilla played in the grass, waiting for Nick to return his playmate, Moka, to the ground. He was smaller and slightly younger—a year and a half old—and was born in the same region along the Congo River. When he was about 10 months old, native hunters trapped him. He was the only member of his family taken alive. Nick named him Nikumba for a village in the region where he was captured. Soon after their captures, both gorillas were turned over to French colonial government authorities who housed the young apes together. The two gorillas formed a close bond by sleeping and playing together and giving each other the attention and touch they were missing from their mothers. Nick held Moka as the camera took several more pictures. She was timid, affec-

Nick Arundel with two baby gorillas, Moka and Nikumba, that he brought back from the. Belgian Congo in 1955. tionate, and content to be in Nick’s arms. Nikumba, on the other hand, did not like being separated from Moka. He was curious and needy and would violently resist, even bite, anyone who handled him independently from Moka. The gorillas lived most of their short lives in captivity in the French Equatorial African capital of Brazzaville. Now it would be Nick who would comfort, snuggle, and hand feed the babies while escorting them out of the Congo and to their permanent home at the National Zoo in Washington, D.C. It took Nick several days to find an airline willing to fly the gorillas across the Atlantic Ocean. He finally called Sabena, a small Belgian airline with a reliable history of flights in the Congo. He made a promise to the airline that if it took him and the two baby gorillas out of Africa, he would have reporters and photographers on the tarmac in New York City taking pictures of its plane. That was the incentive the airline needed, and it agreed to fly Nick and the apes. Nick dressed Nikumba and Moka in diapers, packed a bag full of infant formula and baby bottles, and, with a gorilla in each arm, boarded the Sabena Airlines DC-6. The apes’

closeness with each other and their tameness from being in captivity at such young ages made them excellent airline passengers as they flew away from their homeland. When they arrived at the National Zoo, Moka and Nikumba were placed in the same small barred cage in the Small Mammal House. As newspaper photographers captured the long-anticipated moment, Nick climbed inside thecage to play with the apes. Nikumba clung tightly to Nick’s neck and wrapped his toes around his finger, as if anticipating that Nick would soon leave the cage without him. In his other arm, Moka also gripped tightly to her surrogate parent. Nick felt accomplished. His mission was to bring gorillas to the National Zoo and with militaristic determination, he met his goal. The journey to bring the baby gorillas from Africa to the National Zoo, however, was only the beginning of dramatic changes for the young gorillas, for the zoo that would be their home for the rest of their lives, and for Nick, who at first bragged about capturing the gorillas himself, but then spent the rest of his life dedicating his time, money, and energy to improving the National Zoo and protecting future generations of wild African animals. Nick’s devotion to Moka and Nikumba would continue. The intertwined lives of Nick, Moka and Nikumba, and the National Zoo brought national and global improvements to the compassion and conservation of captive animals and their wild relatives. But before evolving into an internationally respected center, the zoo—and its gorillas— first had a lot of growing to do. Reprinted with permission from Raising America’s Zoo: How Two Wild Gorillas Helped Transform the National Zoo. (Mascot Books, 2017) More information can be found at www.RaisingAmericasZoo.com or karacarundel@gmail.com.

Kara Arundel’s new book about her late father-in-law Nick Arundel, the former owner of the Fauquier Times, and his quest to bring two wild gorillas to the National Zoo. 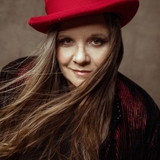