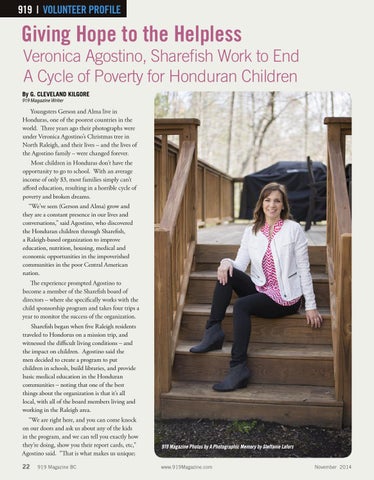 Giving Hope to the Helpless

Veronica Agostino, Sharefish Work to End A Cycle of Poverty for Honduran Children

Youngsters Gerson and Alma live in Honduras, one of the poorest countries in the world. Three years ago their photographs were under Veronica Agostino’s Christmas tree in North Raleigh, and their lives – and the lives of the Agostino family – were changed forever. Most children in Honduras don’t have the opportunity to go to school. With an average income of only $3, most families simply can’t afford education, resulting in a horrible cycle of poverty and broken dreams. “We’ve seen (Gerson and Alma) grow and they are a constant presence in our lives and conversations,” said Agostino, who discovered the Honduran children through Sharefish, a Raleigh-based organization to improve education, nutrition, housing, medical and economic opportunities in the impoverished communities in the poor Central American nation. The experience prompted Agostino to become a member of the Sharefish board of directors – where she specifically works with the child sponsorship program and takes four trips a year to monitor the success of the organization. Sharefish began when five Raleigh residents traveled to Hondorus on a mission trip, and witnessed the difficult living conditions – and the impact on children. Agostino said the men decided to create a program to put children in schools, build libraries, and provide basic medical education in the Honduran communities – noting that one of the best things about the organization is that it’s all local, with all of the board members living and working in the Raleigh area. “We are right here, and you can come knock on our doors and ask us about any of the kids in the program, and we can tell you exactly how they’re doing, show you their report cards, etc,” Agostino said. “That is what makes us unique; 22 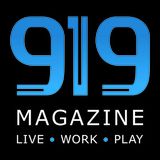