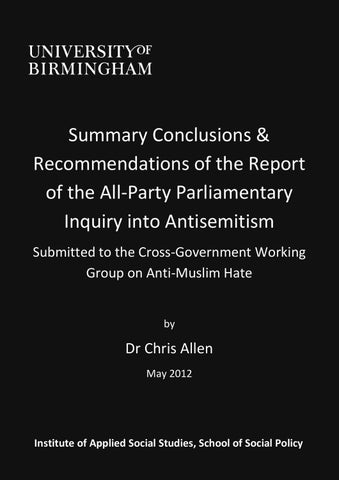 Defining Antisemitism The APPG recommended that the EUMC Working Definition of antisemitism be adopted and promoted by the Government and law enforcement agencies. â&#x20AC;&#x153;Antisemitism is a certain perception of Jews, which may be expressed as hatred toward Jews. Rhetorical and physical manifestations of antisemitism are directed toward Jewish or non-Jewish individuals and/or their property, toward Jewish community institutions and religious facilities.â&#x20AC;?

Antisemitic Incidents The APPG recommended the Home Office provide a greater level of support in addressing the security needs of British Jews, especially with reference to their places of worship and schools. As a result of the potential value of police data on anti-Jewish incidents, the APPG concluded that it was a matter of concern that only a minority of police forces in the UK had the capability to record antisemitic incidents. Given that all police forces in the United Kingdom are required to have the capacity to record racist incidents and provide annual data to the Home Office irrespective of the size of minority ethnic communities in their areas, the APPG deemed it inexcusable that there was not a similar requirement for the recording of antisemitic incidents. The APPG recommended the police have one universal and comprehensive recording facility rather than leaving it to the discretion of individual forces and that the model adopted by the Metropolitan Police of categorising incidents as both racist and anti-Semitic be introduced across all police forces in the UK. It recommended the Home Office direct research resources to the extent of antisemitism and reports annually to Parliament. Likewise, the APPG concluded the Community Security Trust performed a valuable role and recommended greater co-operation between the police and the CST, with particular focus on tackling dual reporting. It also suggested the Crown Prosecution Service (CPS) investigate the reasons for the low number of prosecutions and reports back to Parliament. It also recommended the CPS conduct a review of cases where prosecutions for incitement to racial hatred have been brought, to see what lessons can be learned.

Antisemitic Discourse The APPG argued that ethnically and religiously motivated hatred, violence and prejudice, wherever they occur, should earn unconditional condemnation; sympathy and support for the victims should not be conditional on their alleged behaviour or political convictions.

The APPG set out how the correlation between conflict in the Middle East and attacks on Jewish communities are better understood, welcoming academic research on the issue.

Contemporary Sources of Antisemitism The APPG recommended providers of online payments systems adopt Offensive Material Policies which they actively police and that organisations have clear mechanisms for members of the public to report any breaches of the policy. In line with this recommendation, it suggested providers strengthen links with organisations such as Searchlight, to monitor the presence of racist, including antisemitic, material online and respond quickly. Noting that the overt threat from the far right towards Jews may not be as significant as it once was, the APPG stated how there remained no room for complacency: Holocaust denial and Jewish conspiracy theories remained core elements of far right ideology. Given the links between the BNP and similar antisemitic, anti-Muslim and xenophobic political parties in Europe, the APPG recommended that the Foreign and Commonwealth Office report on far right activity as part of its published political reporting to Parliament â&#x20AC;&#x201C; possibly as an annex in its annual human rights report. The APPG noted how a minority of Islamist extremists in the UK incite hatred towards Jews. Whilst also acknowledging the undoubted prejudice and difficulties that British Muslims feel, these cannot be used to justify antisemitic words and violence. It also noted that whilst the boycott of Holocaust Memorial Day was not seen to be motivated by antisemitism it was possible that this gave out the wrong signals. In doing so, it called upon the MCB to rethink its approach to the national event. The APPG recommended the Electoral Commission draw up a contract of acceptable behaviour which outlines the duty of all election candidates to exercise due care when addressing issues such as racism, community relations and minorities during political campaigning. It suggested that a discussion needed to take place within the media on the impact of language and imagery in current discourse on Judaism, anti-Zionism and Israel; calling upon the media and its reporting to show sensitivity and balance in matters relating to international events because of the significant consequences it has on the interaction between communities in Britain. Pointing out that criticism of Israel or Zionism was not necessarily anti-Semitic, the APPG noted how the converse was also true: it is never acceptable to mask hurtful racial generalisations by claiming the right to legitimate political discourse. The APPG recommended the Foreign and Commonwealth Office examine ways of convincing governments of countries where antisemitic internet sites originate to take action to close them down.

The APPG suggested that a new approach was maybe needed in terms of freedom of expression to address those sites on the internet which allow the public dissemination of material aimed at stirring up race hate and antisemitism. It recommended relevant Government departments convene an international conference to agree a clear position on the situation: to discuss objectives for targeting offensive material received in the UK from overseas sources.

Antisemitism on Campus The APPG recommended that Jewish organisations like the CST and the UJS set up reporting facilities that allow unchallengeable, evidenced examples of abusive behaviour especially on universities. It added that University Authorities should also record all examples of students reporting behaviour, statements, speeches, or acts which they consider to be antisemitic. It added that calls to boycott contact with academics working in Israel were an assault on academic freedom and intellectual exchange. It recommended that pro-democracy lecturers in the new University and College Lecturers Union (UCLU) be given support tocombat such selective boycotts that are anti-Jewish in practice, urging union’s executive and leadership to oppose the boycott. Consistent attempts to boycott and delegitimise Jewish Societies and their activities on campus had diverted the attention and resources of Jewish students away from opportunities to conduct internal debates on Jewish issues, including of Israel. Such discussions should, the APPG recommended, be encouraged and facilitated. The APPG noted how Jewish students felt disproportionately threatened in British universities as a result of antisemitic activities which vary from campus to campus. Attacks on Jewish students and their halls of residence, as well as a lack of respect shown for observant Jewish students and their calendar requirements were seen to amount to a form of campus antisemitism which the APPG suggested Vice Chancellors should tackle vigorously. While criticism of Israel – often hard-hitting in the rough and tumble of student politics – was seen to be legitimate, the language of some speakers was also seen to too often cross the line into generalised attacks on Jews. The APPG noted how lecturers and university authorities had in some cases reacted firmly to examples of anti-Jewish activity on campus but also agreed with the CRE (as it was in 2006) Chair, Trevor Philips, that the response of Vice Chancellors was at best ‘patchy’. It went on to recommend that Vice Chancellors take a greater interest in combating acts, speeches, literature and events that cause anxiety or alarm amongst their Jewish students. It recommended Vice Chancellors set up a working party to make clear that British universities are free of any expression of racism, and take robust action against antisemitism on campus.

Addressing Antisemitism The APPG recommended both the Home Office and the Department for Communities and Local Government work together to combat antisemitism by setting up a cross-departmental task force to achieve this. It noted how community cohesion was vital to combating antisemitism and recommended that increased levels of public funding should be directed towards promoting good community relations projects to encourage an environment of respect and understanding. It recommended the Department for Communities and Local Government take the lead in commissioning an annual survey investigating attitudes and tensions between Britainâ&#x20AC;&#x2122;s communities and produces a report on the trends over time, to be monitored by the now defunct Commission for Racial Equality. It suggested that Jewish and Muslim communities and interfaith groups should promote joint leadership programmes for young Muslims and Jews. It believed that Government has a critical interest in and role to play in ensuring that interfaith dialogue is undertaken by key leaders in all minority communities. It therefore recommended the Department for Communities and Local Government support the work of the Faith Communities Consultative Council, using it to facilitate bi-annual meetings between leaders of all major faith communities, with special emphasis on improving understanding between the Board of Deputies, the Muslim Council of Britain and other, newer leadership groups. The APPG concluded that initiatives such as twinning schemes between schools in different communities had the potential to have a lasting impact on cross-cultural understanding and so recommended Government, through the DfES and the DCLG, take a lead role in ensuring that there be a duty on schools to promote contact, engagement and joint curricula. It also concluded that there was a need to explain to school-children the history of antisemitism. As such, the APPG recommended the Department for Education and Skills, working with the Commission for Racial Equality, update its guidance to local authorities and place upon them a greater duty to provide effective anti-racist education. The APPG recommended that international treaty-based organisations like the OSCE, the EU and the Council of Europe be fully seized of the problem of contemporary anti-Semitism, welcoming the appointment of an OSCE Special Representative on antisemitism. The APPG recommended the Foreign and Commonwealth Office give full support to this work, avoiding the temptation to bury the specific problem of antisemitism in a wider context of anti-racism. It also recommended the Prime Minister appoint a special envoy on antisemitism from amongst serving parliamentarians to co-ordinate this work and represent the UK worldwide and in Britain. 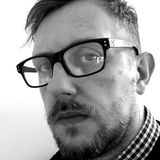 Summary Report of the APPG into Antisemitism

Summary Conclusions & Recommendations of the Report of the All-Party Parliamentary Inquiry into Antisemitism, submitted to the Cross Governm...

Summary Report of the APPG into Antisemitism

Summary Conclusions & Recommendations of the Report of the All-Party Parliamentary Inquiry into Antisemitism, submitted to the Cross Governm...