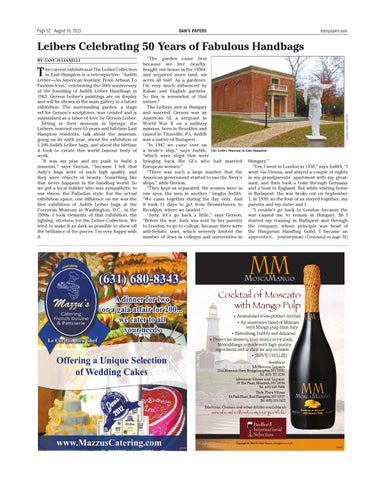 he current exhibition at The Leiber Collection in East Hampton is a retrospective: “Judith Leiber—An American Journey: From Artisan To Fashion Icon,” celebrating the 50th anniversary of the founding of Judith Leiber Handbags in 1963. Gerson Leiber’s paintings are on display and will be shown in the main gallery in a future exhibition. The surrounding garden, a stage set for Gerson’s sculptures, was created and is maintained as a labor of love by Gerson Leiber. Sitting in their museum in Springs, the Leibers, married over 65 years and full-time East Hampton residents, talk about the museum, going on its sixth year, about the exhibition of 1,200 Judith Leiber bags, and about the lifetime it took to create this world famous body of work. “It was my plan and my push to build a museum,” says Gerson, “because I felt that Judy’s bags were of such high quality, and they were objects of beauty. Something like that never happens in the handbag world. So we got a local builder who was sympathetic to our vision, the Palladian style. For the actual exhibition space, one influence on me was the first exhibition of Judith Leiber bags at the Corcoran Museum in Washington, D.C., in the 1990s. I took elements of that exhibition, the lighting, etcetera, for the Leiber Collection. We tried to make it as dark as possible to show off the brilliance of the pieces. I’m very happy with it.

“The garden came first because we live nearby, bought our house in the 1950s, and acquired more land, six acres all told. As a gardener, I’m very much influenced by Italian and English gardens. So this is somewhat of that nature.” The Leibers met in Hungary and married. Gerson was an American GI, a sergeant in World War II on a military mission, born in Brooklyn and raised in Titusville, PA. Judith was a native of Budapest. “In 1947 we came over on a bride’s ship,” says Judith, The Leiber Museum in East Hampton “which were ships that were bringing back the GI’s who had married Hungary.” European women.” “Yes, I went to London in 1938,” says Judith. “I “There was such a large number that the went via Vienna, and stayed a couple of nights American government started to use the Navy’s in my grandparents’ apartment with my greatships,” adds Gerson. aunt, and then took a train through Germany “They kept us separated; the women were in and a boat to England. But while visiting home one area, the men in another,” laughs Judith. in Budapest, the war broke out on September “We came together during the day only. And 1, in 1939, so the four of us stayed together, my it took 11 days to get from Bremerhaven to parents and my sister and I. Brooklyn, where we landed.” “I couldn’t go back to London because the “Judy, let’s go back a little,” says Gerson, war caused me to remain in Hungary. So I “Before the war, Judy was sent by her parents started my training in Budapest and through to London, to go to college, because there were the company, whose principle was head of anti-Semitic laws, which severely limited the the Hungarian Handbag Guild, I became an number of Jews in colleges and universities in apprentice, journeyman (Continued on page 56)

Cocktail of Moscato with Mango Pulp

• Aromatized wine-product cocktail • An innovative blend of Moscato with Mango pulp from Italy • Refreshing, bubbly and delicious • Perfect for desserts, fruit drinks or by itself, MoscaMango is made with high quality ingredients and is ideal for any occasion • SERVE CHILLED Available at:

Martinis, Cosmos and other drinks available at: 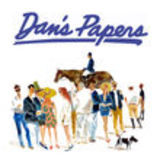