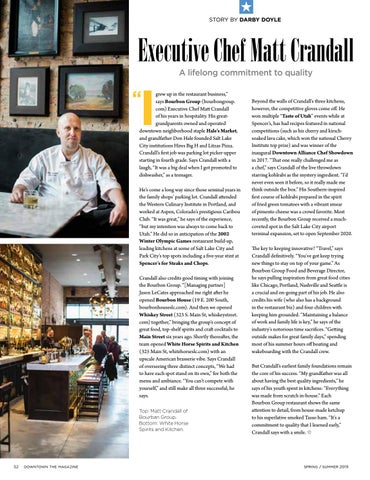 grew up in the restaurant business,” says Bourbon Group (bourbongroup. com) Executive Chef Matt Crandall of his years in hospitality. His greatgrandparents owned and operated downtown neighborhood staple Hale’s Market, and grandfather Don Hale founded Salt Lake City institutions Hires Big H and Litzas Pizza. Crandall’s first job was parking lot picker-upper starting in fourth grade. Says Crandall with a laugh, “It was a big deal when I got promoted to dishwasher,” as a teenager. He’s come a long way since those seminal years in the family shops’ parking lot. Crandall attended the Western Culinary Institute in Portland, and worked at Aspen, Colorado’s prestigious Caribou Club. “It was great,” he says of the experience, “but my intention was always to come back to Utah.” He did so in anticipation of the 2002 Winter Olympic Games restaurant build-up, leading kitchens at some of Salt Lake City and Park City’s top spots including a five-year stint at Spencer’s for Steaks and Chops. Crandall also credits good timing with joining the Bourbon Group. “[Managing partner] Jason LeCates approached me right after he opened Bourbon House (19 E. 200 South, bourbonhouseslc.com). And then we opened Whiskey Street (323 S. Main St, whiskeystreet. com) together,” bringing the group’s concept of great food, top-shelf spirits and craft cocktails to Main Street six years ago. Shortly thereafter, the team opened White Horse Spirits and Kitchen (325 Main St, whitehorseslc.com) with an upscale American brasserie vibe. Says Crandall of overseeing three distinct concepts, “We had to have each spot stand on its own,” for both the menu and ambiance. “You can’t compete with yourself,” and still make all three successful, he says.

Beyond the walls of Crandall’s three kitchens, however, the competitive gloves come off. He won multiple “Taste of Utah” events while at Spencer’s, has had recipes featured in national competitions (such as his cherry and kirschsoaked lava cake, which won the national Cherry Institute top prize) and was winner of the inaugural Downtown Alliance Chef Showdown in 2017. “That one really challenged me as a chef,” says Crandall of the live throwdown starring kohlrabi as the mystery ingredient. “I’d never even seen it before, so it really made me think outside the box.” His Southern-inspired first course of kohlrabi prepared in the spirit of fried green tomatoes with a vibrant smear of pimento cheese was a crowd favorite. Most recently, the Bourbon Group received a muchcoveted spot in the Salt Lake City airport terminal expansion, set to open September 2020. The key to keeping innovative? “Travel,” says Crandall definitively. “You’ve got keep trying new things to stay on top of your game.” As Bourbon Group Food and Beverage Director, he says pulling inspiration from great food cities like Chicago, Portland, Nashville and Seattle is a crucial and on-going part of his job. He also credits his wife (who also has a background in the restaurant biz) and four children with keeping him grounded. “Maintaining a balance of work and family life is key,” he says of the industry’s notorious time sacrifices. “Getting outside makes for great family days,” spending most of his summer hours off boating and wakeboarding with the Crandall crew. But Crandall’s earliest family foundations remain the core of his success. “My grandfather was all about having the best quality ingredients,” he says of his youth spent in kitchens: “Everything was made from scratch in-house.” Each Bourbon Group restaurant shows the same attention to detail, from house-made ketchup to his superlative smoked Tasso ham. “It’s a commitment to quality that I learned early,” Crandall says with a smile. I