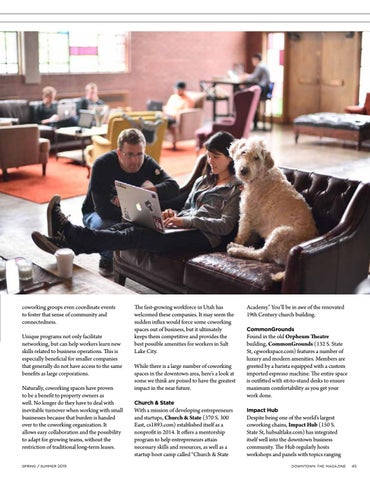 coworking groups even coordinate events to foster that sense of community and connectedness. Unique programs not only facilitate networking, but can help workers learn new skills related to business operations. This is especially beneficial for smaller companies that generally do not have access to the same benefits as large corporations. Naturally, coworking spaces have proven to be a benefit to property owners as well. No longer do they have to deal with inevitable turnover when working with small businesses because that burden is handed over to the coworking organization. It allows easy collaboration and the possibility to adapt for growing teams, without the restriction of traditional long-term leases. spring / summer 2019

The fast-growing workforce in Utah has welcomed these companies. It may seem the sudden influx would force some coworking spaces out of business, but it ultimately keeps them competitive and provides the best possible amenities for workers in Salt Lake City. While there is a large number of coworking spaces in the downtown area, here’s a look at some we think are poised to have the greatest impact in the near future. Church & State

With a mission of developing entrepreneurs and startups, Church & State (370 S. 300 East, cs1893.com) established itself as a nonprofit in 2014. It offers a mentorship program to help entrepreneurs attain necessary skills and resources, as well as a startup boot camp called “Church & State

Academy.” You’ll be in awe of the renovated 19th Century church building. CommonGrounds

Found in the old Orpheum Theatre building, CommonGrounds (132 S. State St, cgworkspace.com) features a number of luxury and modern amenities. Members are greeted by a barista equipped with a custom imported espresso machine. The entire space is outfitted with sit-to-stand desks to ensure maximum comfortability as you get your work done. Impact Hub

Despite being one of the world’s largest coworking chains, Impact Hub (150 S. State St, hubsaltlake.com) has integrated itself well into the downtown business community. The Hub regularly hosts workshops and panels with topics ranging downtown the magazine