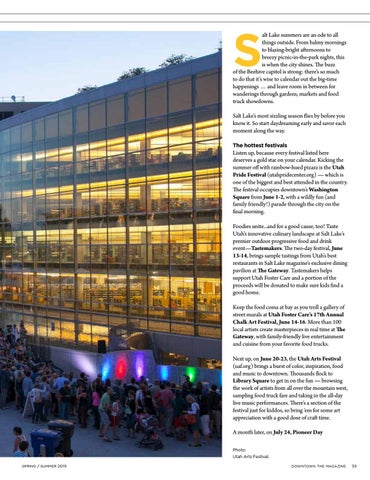 alt Lake summers are an ode to all things outside. From balmy mornings to blazing-bright afternoons to breezy picnic-in-the-park nights, this is when the city shines. The buzz of the Beehive capitol is strong: there’s so much to do that it’s wise to calendar out the big-time happenings … and leave room in between for wanderings through gardens, markets and food truck showdowns. Salt Lake’s most sizzling season flies by before you know it. So start daydreaming early and savor each moment along the way. The hottest festivals

Listen up, because every festival listed here deserves a gold star on your calendar. Kicking the summer off with rainbow-hued pizazz is the Utah Pride Festival (utahpridecenter.org) — which is one of the biggest and best attended in the country. The festival occupies downtown’s Washington Square from June 1-2, with a wildly fun (and family friendly!) parade through the city on the final morning. Foodies unite...and for a good cause, too! Taste Utah’s innovative culinary landscape at Salt Lake’s premier outdoor progressive food and drink event—Tastemakers. The two-day festival, June 13-14, brings sample tastings from Utah’s best restaurants in Salt Lake magazine’s exclusive dining pavilion at The Gateway. Tastemakers helps support Utah Foster Care and a portion of the proceeds will be donated to make sure kids find a good home. Keep the food coma at bay as you troll a gallery of street murals at Utah Foster Care’s 17th Annual Chalk Art Festival, June 14-16. More than 100 local artists create masterpieces in real time at The Gateway, with family-friendly live entertainment and cuisine from your favorite food trucks. Next up, on June 20-23, the Utah Arts Festival (uaf.org) brings a burst of color, inspiration, food and music to downtown. Thousands flock to Library Square to get in on the fun — browsing the work of artists from all over the mountain west, sampling food truck fare and taking in the all-day live music performances. There’s a section of the festival just for kiddos, so bring ‘em for some art appreciation with a good dose of craft time. A month later, on July 24, Pioneer Day Photo: Utah Arts Festival. spring / summer 2019