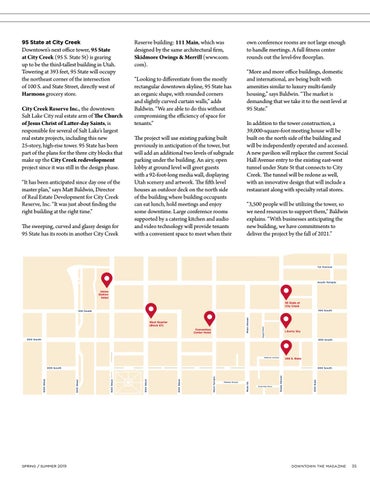 Downtown’s next office tower, 95 State at City Creek (95 S. State St) is gearing up to be the third-tallest building in Utah. Towering at 393 feet, 95 State will occupy the northeast corner of the intersection of 100 S. and State Street, directly west of Harmons grocery store. City Creek Reserve Inc., the downtown Salt Lake City real estate arm of The Church of Jesus Christ of Latter-day Saints, is responsible for several of Salt Lake’s largest real estate projects, including this new 25-story, high-rise tower. 95 State has been part of the plans for the three city blocks that make up the City Creek redevelopment project since it was still in the design phase. “It has been anticipated since day one of the master plan,” says Matt Baldwin, Director of Real Estate Development for City Creek Reserve, Inc. “It was just about finding the right building at the right time.” The sweeping, curved and glassy design for 95 State has its roots in another City Creek

Reserve building: 111 Main, which was designed by the same architectural firm, Skidmore Owings & Merrill (www.som. com). “Looking to differentiate from the mostly rectangular downtown skyline, 95 State has an organic shape, with rounded corners and slightly curved curtain walls,” adds Baldwin. “We are able to do this without compromising the efficiency of space for tenants.” The project will use existing parking built previously in anticipation of the tower, but will add an additional two levels of subgrade parking under the building. An airy, open lobby at ground level will greet guests with a 92-foot-long media wall, displaying Utah scenery and artwork. The fifth level houses an outdoor deck on the north side of the building where building occupants can eat lunch, hold meetings and enjoy some downtime. Large conference rooms supported by a catering kitchen and audio and video technology will provide tenants with a convenient space to meet when their

own conference rooms are not large enough to handle meetings. A full fitness center rounds out the level-five floorplan. “More and more office buildings, domestic and international, are being built with amenities similar to luxury multi-family housing,” says Baldwin. “The market is demanding that we take it to the next level at 95 State.” In addition to the tower construction, a 39,000-square-foot meeting house will be built on the north side of the building and will be independently operated and accessed. A new pavilion will replace the current Social Hall Avenue entry to the existing east-west tunnel under State St that connects to City Creek. The tunnel will be redone as well, with an innovative design that will include a restaurant along with specialty retail stores. “3,500 people will be utilizing the tower, so we need resources to support them,” Baldwin explains. “With businesses anticipating the new building, we have commitments to deliver the project by the fall of 2021.”