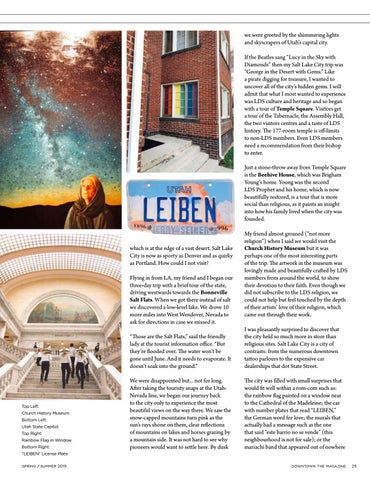 we were greeted by the shimmering lights and skyscrapers of Utah’s capital city. If the Beatles sang “Lucy in the Sky with Diamonds” then my Salt Lake City trip was “George in the Desert with Gems.” Like a pirate digging for treasure, I wanted to uncover all of the city’s hidden gems. I will admit that what I most wanted to experience was LDS culture and heritage and so began with a tour of Temple Square. Visitors get a tour of the Tabernacle, the Assembly Hall, the two visitors centres and a taste of LDS history. The 177-room temple is off-limits to non-LDS members. Even LDS members need a recommendation from their bishop to enter. Just a stone-throw away from Temple Square is the Beehive House, which was Brigham Young’s home. Young was the second LDS Prophet and his home, which is now beautifully restored, is a tour that is more social than religious, as it paints an insight into how his family lived when the city was founded.

which is at the edge of a vast desert. Salt Lake City is now as sporty as Denver and as quirky as Portland. How could I not visit? Flying in from LA, my friend and I began our three-day trip with a brief tour of the state, driving westwards towards the Bonneville Salt Flats. When we got there instead of salt we discovered a low-level lake. We drove 10 more miles into West Wendover, Nevada to ask for directions in case we missed it.

My friend almost groaned (“not more religion”) when I said we would visit the Church History Museum but it was perhaps one of the most interesting parts of the trip. The artwork in the museum was lovingly made and beautifully crafted by LDS members from around the world, to show their devotion to their faith. Even though we did not subscribe to the LDS religion, we could not help but feel touched by the depth of their artists’ love of their religion, which came out through their work.

“Those are the Salt Flats,” said the friendly lady at the tourist information office. “But they’re flooded over. The water won’t be gone until June. And it needs to evaporate. It doesn’t soak into the ground.”

I was pleasantly surprised to discover that the city held so much more in store than religious sites. Salt Lake City is a city of contrasts: from the numerous downtown tattoo parlours to the expensive car dealerships that dot State Street.

We were disappointed but... not for long. After taking the touristy snaps at the UtahNevada line, we began our journey back to the city only to experience the most beautiful views on the way there. We saw the snow-capped mountains turn pink as the sun’s rays shone on them, clear reflections of mountains on lakes and horses grazing by a mountain side. It was not hard to see why pioneers would want to settle here. By dusk

The city was filled with small surprises that would fit well within a rom-com such as: the rainbow flag painted on a window near to the Cathedral of the Madeleine; the car with number plates that read “LEIBEN,” the German word for love; the murals that actually had a message such as the one that said “este barrio no se vende” (this neighbourhood is not for sale); or the mariachi band that appeared out of nowhere downtown the magazine