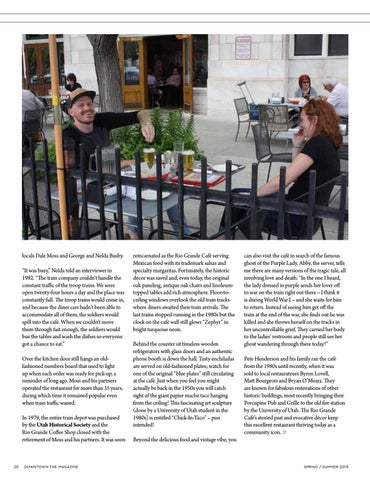 locals Dale Moss and George and Nelda Busby. “It was busy,” Nelda told an interviewer in 1982. “The train company couldn’t handle the constant traffic of the troop trains. We were open twenty-four hours a day and the place was constantly full. The troop trains would come in, and because the diner cars hadn’t been able to accommodate all of them, the soldiers would spill into the café. When we couldn’t move them through fast enough, the soldiers would bus the tables and wash the dishes so everyone got a chance to eat.” Over the kitchen door still hangs an oldfashioned numbers board that used to light up when each order was ready for pick-up, a reminder of long ago. Moss and his partners operated the restaurant for more than 35 years, during which time it remained popular even when train traffic waned. In 1979, the entire train depot was purchased by the Utah Historical Society and the Rio Grande Coffee Shop closed with the retirement of Moss and his partners. It was soon

reincarnated as the Rio Grande Café serving Mexican food with its trademark salsas and specialty margaritas. Fortunately, the historic décor was saved and, even today, the original oak paneling, antique oak chairs and linoleumtopped tables add rich atmosphere. Floor-toceiling windows overlook the old train tracks where diners awaited their train arrivals. The last trains stopped running in the 1980s but the clock on the café wall still glows “Zephyr” in bright turquoise neon. Behind the counter sit timeless wooden refrigerators with glass doors and an authentic phone booth is down the hall. Tasty enchiladas are served on old-fashioned plates; watch for one of the original “blue plates” still circulating at the café. Just when you feel you might actually be back in the 1950s you will catch sight of the giant papier mache taco hanging from the ceiling! This fascinating art sculpture (done by a University of Utah student in the 1980s) is entitled “Chick-In-Taco” – pun intended! Beyond the delicious food and vintage vibe, you

can also visit the café in search of the famous ghost of the Purple Lady. Abby, the server, tells me there are many versions of the tragic tale, all involving love and death. “In the one I heard, the lady dressed in purple sends her lover off to war on the train right out there – I think it is during World War I – and she waits for him to return. Instead of seeing him get off the train at the end of the war, she finds out he was killed and she throws herself on the tracks in her uncontrollable grief. They carried her body to the ladies’ restroom and people still see her ghost wandering through there today!” Pete Henderson and his family ran the café from the 1980s until recently, when it was sold to local restaurateurs Byron Lovell, Matt Bourgeois and Bryan O’Meara. They are known for fabulous restorations of other historic buildings, most recently bringing their Porcupine Pub and Grille to the old fire station by the University of Utah. The Rio Grande Café’s storied past and evocative décor keep this excellent restaurant thriving today as a community icon. I