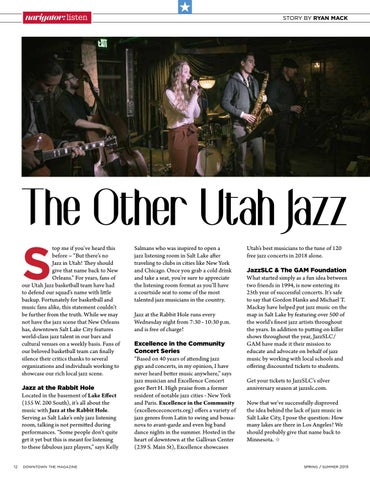 top me if you’ve heard this before – “But there’s no Jazz in Utah! They should give that name back to New Orleans.” For years, fans of our Utah Jazz basketball team have had to defend our squad’s name with little backup. Fortunately for basketball and music fans alike, this statement couldn’t be further from the truth. While we may not have the jazz scene that New Orleans has, downtown Salt Lake City features world-class jazz talent in our bars and cultural venues on a weekly basis. Fans of our beloved basketball team can finally silence their critics thanks to several organizations and individuals working to showcase our rich local jazz scene. Jazz at the Rabbit Hole Located in the basement of Lake Effect (155 W. 200 South), it’s all about the music with Jazz at the Rabbit Hole. Serving as Salt Lake’s only jazz listening room, talking is not permitted during performances. “Some people don’t quite get it yet but this is meant for listening to these fabulous jazz players,” says Kelly 12

Salmans who was inspired to open a jazz listening room in Salt Lake after traveling to clubs in cities like New York and Chicago. Once you grab a cold drink and take a seat, you’re sure to appreciate the listening room format as you’ll have a courtside seat to some of the most talented jazz musicians in the country. Jazz at the Rabbit Hole runs every Wednesday night from 7:30 - 10:30 p.m. and is free of charge! Excellence in the Community Concert Series “Based on 40 years of attending jazz gigs and concerts, in my opinion, I have never heard better music anywhere,” says jazz musician and Excellence Concert goer Bert H. High praise from a former resident of notable jazz cities - New York and Paris. Excellence in the Community (excellenceconcerts.org) offers a variety of jazz genres from Latin to swing and bossanova to avant-garde and even big band dance nights in the summer. Hosted in the heart of downtown at the Gallivan Center (239 S. Main St), Excellence showcases

Utah’s best musicians to the tune of 120 free jazz concerts in 2018 alone. JazzSLC & The GAM Foundation What started simply as a fun idea between two friends in 1994, is now entering its 25th year of successful concerts. It’s safe to say that Gordon Hanks and Michael T. Mackay have helped put jazz music on the map in Salt Lake by featuring over 500 of the world's finest jazz artists throughout the years. In addition to putting on killer shows throughout the year, JazzSLC/ GAM have made it their mission to educate and advocate on behalf of jazz music by working with local schools and offering discounted tickets to students. Get your tickets to JazzSLC’s silver anniversary season at jazzslc.com. Now that we’ve successfully disproved the idea behind the lack of jazz music in Salt Lake City, I pose the question: How many lakes are there in Los Angeles? We should probably give that name back to Minnesota. I