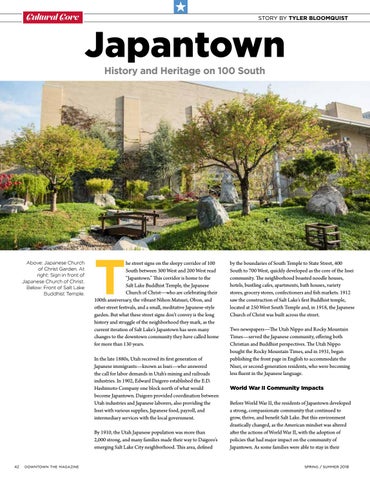 Japantown History and Heritage on 100 South

he street signs on the sleepy corridor of 100 South between 300 West and 200 West read “Japantown.” This corridor is home to the Salt Lake Buddhist Temple, the Japanese Church of Christ—who are celebrating their 100th anniversary, the vibrant Nihon Matsuri, Obon, and other street festivals, and a small, meditative Japanese-style garden. But what these street signs don’t convey is the long history and struggle of the neighborhood they mark, as the current iteration of Salt Lake’s Japantown has seen many changes to the downtown community they have called home for more than 130 years. In the late 1880s, Utah received its first generation of Japanese immigrants—known as Issei—who answered the call for labor demands in Utah’s mining and railroads industries. In 1902, Edward Daigoro established the E.D. Hashimoto Company one block north of what would become Japantown. Daigoro provided coordination between Utah industries and Japanese laborers, also providing the Issei with various supplies, Japanese food, payroll, and intermediary services with the local government. By 1910, the Utah Japanese population was more than 2,000 strong, and many families made their way to Daigoro’s emerging Salt Lake City neighborhood. This area, defined

by the boundaries of South Temple to State Street, 400 South to 700 West, quickly developed as the core of the Issei community. The neighborhood boasted noodle houses, hotels, bustling cafes, apartments, bath houses, variety stores, grocery stores, confectioners and fish markets. 1912 saw the construction of Salt Lake’s first Buddhist temple, located at 250 West South Temple and, in 1918, the Japanese Church of Christ was built across the street. Two newspapers—The Utah Nippo and Rocky Mountain Times—served the Japanese community, offering both Christian and Buddhist perspectives. The Utah Nippo bought the Rocky Mountain Times, and in 1931, began publishing the front page in English to accommodate the Nisei, or second-generation residents, who were becoming less fluent in the Japanese language. World War II Community Impacts Before World War II, the residents of Japantown developed a strong, compassionate community that continued to grow, thrive, and benefit Salt Lake. But this environment drastically changed, as the American mindset was altered after the actions of World War II, with the adoption of policies that had major impact on the community of Japantown. As some families were able to stay in their