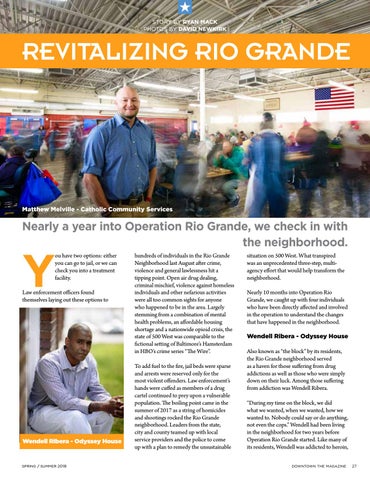 ou have two options: either you can go to jail, or we can check you into a treatment facility.

Law enforcement officers found themselves laying out these options to

hundreds of individuals in the Rio Grande Neighborhood last August after crime, violence and general lawlessness hit a tipping point. Open air drug dealing, criminal mischief, violence against homeless individuals and other nefarious activities were all too common sights for anyone who happened to be in the area. Largely stemming from a combination of mental health problems, an affordable housing shortage and a nationwide opioid crisis, the state of 500 West was comparable to the fictional setting of Baltimore’s Hamsterdam in HBO’s crime series “The Wire”. To add fuel to the fire, jail beds were sparse and arrests were reserved only for the most violent offenders. Law enforcement’s hands were cuffed as members of a drug cartel continued to prey upon a vulnerable population. The boiling point came in the summer of 2017 as a string of homicides and shootings rocked the Rio Grande neighborhood. Leaders from the state, city and county teamed up with local service providers and the police to come up with a plan to remedy the unsustainable

situation on 500 West. What transpired was an unprecedented three-step, multiagency effort that would help transform the neighborhood. Nearly 10 months into Operation Rio Grande, we caught up with four individuals who have been directly affected and involved in the operation to understand the changes that have happened in the neighborhood. Wendell Ribera - Odyssey House Also known as “the block” by its residents, the Rio Grande neighborhood served as a haven for those suffering from drug addictions as well as those who were simply down on their luck. Among those suffering from addiction was Wendell Ribera. “During my time on the block, we did what we wanted, when we wanted, how we wanted to. Nobody could say or do anything, not even the cops.” Wendell had been living in the neighborhood for two years before Operation Rio Grande started. Like many of its residents, Wendell was addicted to heroin, downtown the magazine