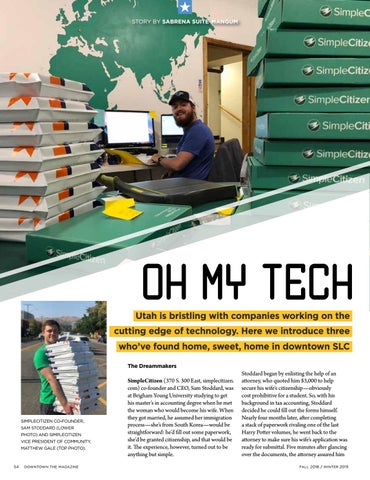 Utah is bristling with companies working on the cutting edge of technology. Here we introduce three who’ve found home, sweet, home in downtown SLC The Dreammakers

SimpleCitizen (370 S. 300 East, simplecitizen. com) co-founder and CEO, Sam Stoddard, was at Brigham Young University studying to get his master’s in accounting degree when he met the woman who would become his wife. When they got married, he assumed her immigration process—she’s from South Korea—would be straightforward: he’d fill out some paperwork, she’d be granted citizenship, and that would be it. The experience, however, turned out to be anything but simple.

Stoddard began by enlisting the help of an attorney, who quoted him $3,000 to help secure his wife’s citizenship—obviously cost prohibitive for a student. So, with his background in tax accounting, Stoddard decided he could fill out the forms himself. Nearly four months later, after completing a stack of paperwork rivaling one of the last Harry Potter volumes, he went back to the attorney to make sure his wife’s application was ready for submittal. Five minutes after glancing over the documents, the attorney assured him fall 2018 / winter 2019