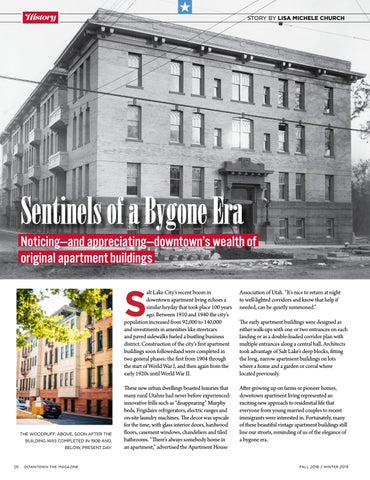 Sentinels of a Bygone Era

THE WOODRUFF, ABOVE, SOON AFTER THE BUILDING WAS COMPLETED IN 1908 AND, BELOW, PRESENT DAY.

alt Lake City’s recent boom in downtown apartment living echoes a similar heyday that took place 100 years ago. Between 1910 and 1940 the city’s population increased from 92,000 to 140,000 and investments in amenities like streetcars and paved sidewalks fueled a bustling business district. Construction of the city’s first apartment buildings soon followedand were completed in two general phases: the first from 1904 through the start of World War I, and then again from the early 1920s until World War II.

Association of Utah. “It’s nice to return at night to well-lighted corridors and know that help if needed, can be quietly summoned.”

These new urban dwellings boasted luxuries that many rural Utahns had never before experienced: innovative frills such as “disappearing” Murphy beds, Frigidaire refrigerators, electric ranges and on-site laundry machines. The decor was upscale for the time, with glass interior doors, hardwood floors, casement windows, chandeliers and tiled bathrooms. “There’s always somebody home in an apartment,” advertised the Apartment House

After growing up on farms or pioneer homes, downtown apartment living represented an exciting new approach to residential life that everyone from young married couples to recent immigrants were interested in. Fortunately, many of these beautiful vintage apartment buildings still line our streets, reminding of us of the elegance of a bygone era.

The early apartment buildings were designed as either walk-ups with one or two entrances on each landing or as a double-loaded corridor plan with multiple entrances along a central hall. Architects took advantage of Salt Lake’s deep blocks, fitting the long, narrow apartment buildings on lots where a home and a garden or corral where located previously.