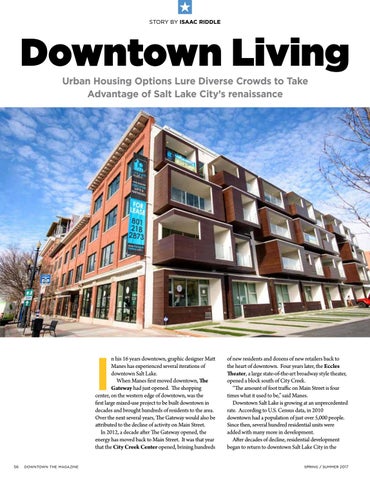 n his 16 years downtown, graphic designer Matt Manes has experienced several iterations of downtown Salt Lake. When Manes first moved downtown, The Gateway had just opened. The shopping center, on the western edge of downtown, was the first large mixed-use project to be built downtown in decades and brought hundreds of residents to the area. Over the next several years, The Gateway would also be attributed to the decline of activity on Main Street. In 2012, a decade after The Gateway opened, the energy has moved back to Main Street. It was that year that the City Creek Center opened, brining hundreds 56

of new residents and dozens of new retailers back to the heart of downtown. Four years later, the Eccles Theater, a large state-of-the-art broadway style theater, opened a block south of City Creek. “The amount of foot traffic on Main Street is four times what it used to be,” said Manes. Downtown Salt Lake is growing at an unprecedented rate. According to U.S. Census data, in 2010 downtown had a population of just over 5,000 people. Since then, several hundred residential units were added with many more in development. After decades of decline, residential development began to return to downtown Salt Lake City in the spring / summer 2017