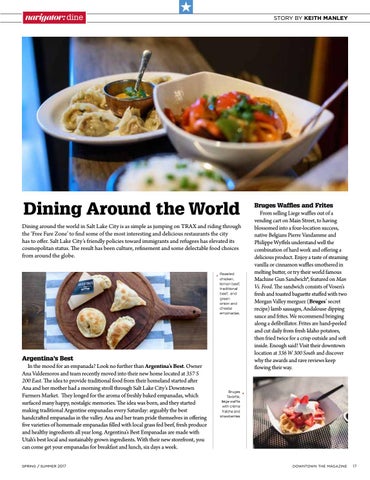 Dining Around the World Dining around the world in Salt Lake City is as simple as jumping on TRAX and riding through the ‘Free Fare Zone’ to find some of the most interesting and delicious restaurants the city has to offer. Salt Lake City’s friendly policies toward immigrants and refugees has elevated its cosmopolitan status. The result has been culture, refinement and some delectable food choices from around the globe. Roasted chicken, lemon beef, traditional beef, and green onion and cheese empinadas.

Argentina’s Best In the mood for an empanada? Look no further than Argentina’s Best. Owner Ana Valdemoros and team recently moved into their new home located at 357 S 200 East. The idea to provide traditional food from their homeland started after Ana and her mother had a morning stroll through Salt Lake City’s Downtown Farmers Market. They longed for the aroma of freshly baked empanadas, which surfaced many happy, nostalgic memories. The idea was born, and they started making traditional Argentine empanadas every Saturday: arguably the best handcrafted empanadas in the valley. Ana and her team pride themselves in offering five varieties of homemade empanadas filled with local grass fed beef, fresh produce and healthy ingredients all year long. Argentina’s Best Empanadas are made with Utah’s best local and sustainably grown ingredients. With their new storefront, you can come get your empanadas for breakfast and lunch, six days a week. spring / summer 2017

Bruges Waffles and Frites From selling Liege waffles out of a vending cart on Main Street, to having blossomed into a four-location success, native Belgians Pierre Vandamme and Philippe Wyffels understand well the combination of hard work and offering a delicious product. Enjoy a taste of steaming vanilla or cinnamon waffles smothered in melting butter, or try their world famous Machine Gun Sandwich®, featured on Man Vs. Food. The sandwich consists of Vosen’s fresh and toasted baguette stuffed with two Morgan Valley merguez (Bruges’ secret recipe) lamb sausages, Andalouse dipping sauce and frites. We recommend bringing along a defibrillator. Frites are hand-peeled and cut daily from fresh Idaho potatoes, then fried twice for a crisp outside and soft inside. Enough said! Visit their downtown location at 336 W 300 South and discover why the awards and rave reviews keep flowing their way.