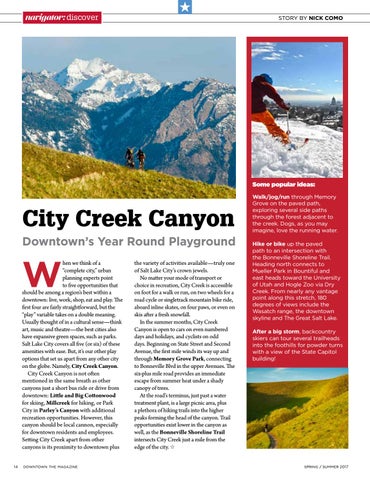 hen we think of a “complete city,” urban planning experts point to five opportunities that should be among a region’s best within a downtown: live, work, shop, eat and play. The first four are fairly straightforward, but the “play” variable takes on a double meaning. Usually thought of in a cultural sense—think art, music and theatre—the best cities also have expansive green spaces, such as parks. Salt Lake City covers all five (or six) of these amenities with ease. But, it’s our other play options that set us apart from any other city on the globe. Namely, City Creek Canyon. City Creek Canyon is not often mentioned in the same breath as other canyons just a short bus ride or drive from downtown: Little and Big Cottonwood for skiing, Millcreek for hiking, or Park City in Parley’s Canyon with additional recreation opportunities. However, this canyon should be local cannon, especially for downtown residents and employees. Setting City Creek apart from other canyons is its proximity to downtown plus 14

the variety of activities available—truly one of Salt Lake City’s crown jewels. No matter your mode of transport or choice in recreation, City Creek is accessible on foot for a walk or run, on two wheels for a road cycle or singletrack mountain bike ride, aboard inline skates, on four paws, or even on skis after a fresh snowfall. In the summer months, City Creek Canyon is open to cars on even numbered days and holidays, and cyclists on odd days. Beginning on State Street and Second Avenue, the first mile winds its way up and through Memory Grove Park, connecting to Bonneville Blvd in the upper Avenues. The six-plus mile road provides an immediate escape from summer heat under a shady canopy of trees. At the road’s terminus, just past a water treatment plant, is a large picnic area, plus a plethora of hiking trails into the higher peaks forming the head of the canyon. Trail opportunities exist lower in the canyon as well, as the Bonneville Shoreline Trail intersects City Creek just a mile from the edge of the city. I

Walk/jog/run through Memory Grove on the paved path, exploring several side paths through the forest adjacent to the creek. Dogs, as you may imagine, love the running water. Hike or bike up the paved path to an intersection with the Bonneville Shoreline Trail. Heading north connects to Mueller Park in Bountiful and east heads toward the University of Utah and Hogle Zoo via Dry Creek. From nearly any vantage point along this stretch, 180 degrees of views include the Wasatch range, the downtown skyline and The Great Salt Lake. After a big storm, backcountry skiers can tour several trailheads into the foothills for powder turns with a view of the State Capitol building!