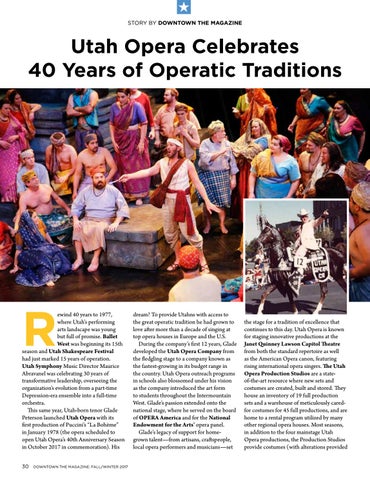 STORY BY DOWNTOWN THE MAGAZINE

dream? To provide Utahns with access to the great operatic tradition he had grown to love after more than a decade of singing at top opera houses in Europe and the U.S. During the company’s first 12 years, Glade developed the Utah Opera Company from the fledgling stage to a company known as the fastest-growing in its budget range in the country. Utah Opera outreach programs in schools also blossomed under his vision as the company introduced the art form to students throughout the Intermountain West. Glade’s passion extended onto the national stage, where he served on the board of OPERA America and for the National Endowment for the Arts’ opera panel. Glade’s legacy of support for homegrown talent—from artisans, craftspeople, local opera performers and musicians—set

the stage for a tradition of excellence that continues to this day. Utah Opera is known for staging innovative productions at the Janet Quinney Lawson Capitol Theatre from both the standard repertoire as well as the American Opera canon, featuring rising international opera singers. The Utah Opera Production Studios are a stateof-the-art resource where new sets and costumes are created, built and stored. They house an inventory of 19 full production sets and a warehouse of meticulously caredfor costumes for 45 full productions, and are home to a rental program utilized by many other regional opera houses. Most seasons, in addition to the four mainstage Utah Opera productions, the Production Studios provide costumes (with alterations provided