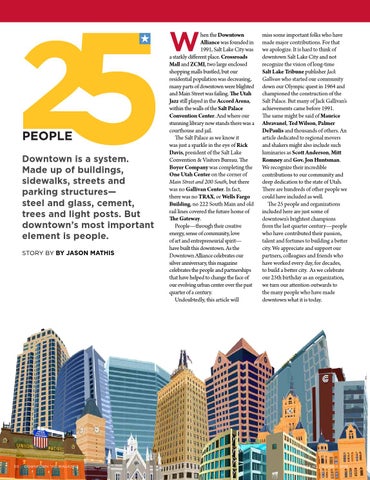 Downtown is a system. Made up of buildings, sidewalks, streets and parking structures— steel and glass, cement, trees and light posts. But downtown’s most important element is people. STORY BY BY JASON MATHIS

hen the Downtown Alliance was founded in 1991, Salt Lake City was a starkly different place. Crossroads Mall and ZCMI, two large enclosed shopping malls bustled, but our residential population was decreasing, many parts of downtown were blighted and Main Street was failing. The Utah Jazz still played in the Accord Arena, within the walls of the Salt Palace Convention Center. And where our stunning library now stands there was a courthouse and jail. The Salt Palace as we know it was just a sparkle in the eye of Rick Davis, president of the Salt Lake Convention & Visitors Bureau. The Boyer Company was completing the One Utah Center on the corner of Main Street and 200 South, but there was no Gallivan Center. In fact, there was no TRAX, or Wells Fargo Building, no 222 South Main and old rail lines covered the future home of The Gateway. People—through their creative energy, sense of community, love of art and entrepreneurial spirit— have built this downtown. As the Downtown Alliance celebrates our silver anniversary, this magazine celebrates the people and partnerships that have helped to change the face of our evolving urban center over the past quarter of a century. Undoubtedly, this article will

miss some important folks who have made major contributions. For that we apologize. It is hard to think of downtown Salt Lake City and not recognize the vision of long-time Salt Lake Tribune publisher Jack Gallivan who started our community down our Olympic quest in 1964 and championed the construction of the Salt Palace. But many of Jack Gallivan’s achievements came before 1991. The same might be said of Maurice Abravanel, Ted Wilson, Palmer DePaulis and thousands of others. An article dedicated to regional movers and shakers might also include such luminaries as Scott Anderson, Mitt Romney and Gov. Jon Huntsman. We recognize their incredible contributions to our community and deep dedication to the state of Utah. There are hundreds of other people we could have included as well. The 25 people and organizations included here are just some of downtown’s brightest champions from the last quarter century—people who have contributed their passion, talent and fortunes to building a better city. We appreciate and support our partners, colleagues and friends who have worked every day, for decades, to build a better city. As we celebrate our 25th birthday as an organization, we turn our attention outwards to the many people who have made downtown what it is today.