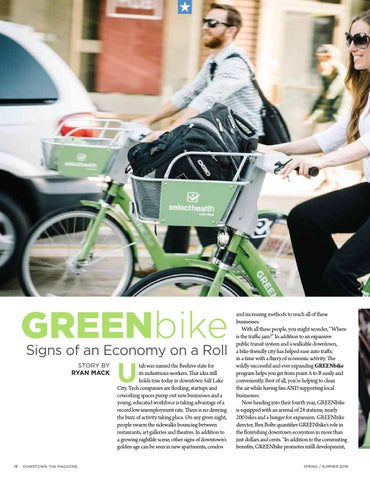 tah was named the Beehive state for its industrious workers. That idea still holds true today in downtown Salt Lake City. Tech companies are flocking, startups and coworking spaces pump out new businesses and a young, educated workforce is taking advantage of a record low unemployment rate. There is no denying the buzz of activity taking place. On any given night, people swarm the sidewalks bouncing between restaurants, art galleries and theatres. In addition to a growing nightlife scene, other signs of downtown’s golden age can be seen in new apartments, condos

and increasing methods to reach all of these businesses. With all these people, you might wonder, “Where is the traffic jam?” In addition to an expansive public transit system and a walkable downtown, a bike-friendly city has helped ease auto traffic in a time with a flurry of economic activity. The wildly successful and ever expanding GREENbike program helps you get from point A to B easily and conveniently. Best of all, you’re helping to clean the air while having fun AND supporting local businesses. Now heading into their fourth year, GREENbike is equipped with an arsenal of 24 stations, nearly 200 bikes and a hunger for expansion. GREENbike director, Ben Bolte quantifies GREENbike’s role in the flourishing downtown ecosystem in more than just dollars and cents. “In addition to the commuting benefits, GREENbike promotes infill development, spring / summer 2016