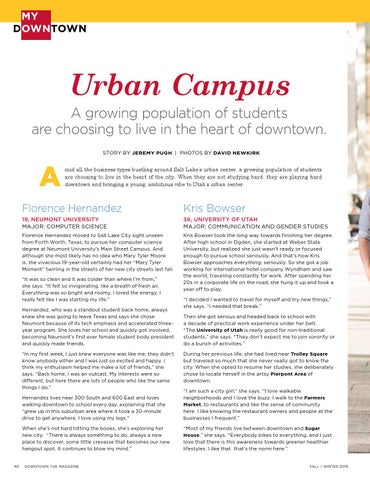 Urban Campus A growing population of students are choosing to live in the heart of downtown. STORY BY JEREMY PUGH | PHOTOS BY DAVID NEWKIRK

mid all the business types bustling around Salt Lake’s urban center, a growing population of students are choosing to live in the heart of the city. When they are not studying hard, they are playing hard downtown and bringing a young, ambitious vibe to Utah’s urban center.

Florence Hernandez moved to Salt Lake City sight unseen from Forth Worth, Texas, to pursue her computer science degree at Neumont University’s Main Street Campus. And although she most likely has no idea who Mary Tyler Moore is, the vivacious 19-year-old certainly had her “Mary Tyler Moment” twirling in the streets of her new city streets last fall.

Kris Bowser took the long way towards finishing her degree. After high school in Ogden, she started at Weber State University, but realized she just wasn’t ready or focused enough to pursue school seriously. And that’s how Kris Bowser approaches everything: seriously. So she got a job working for international hotel company Wyndham and saw the world, traveling constantly for work. After spending her 20s in a corporate life on the road, she hung it up and took a year off to play.

“It was so clean and it was colder than where I’m from,” she says. “It felt so invigorating, like a breath of fresh air. Everything was so bright and roomy, I loved the energy. I really felt like I was starting my life.” Hernandez, who was a standout student back home, always knew she was going to leave Texas and says she chose Neumont because of its tech emphasis and accelerated threeyear program. She loves her school and quickly got involved, becoming Neumont’s first ever female student body president and quickly made friends. “In my first week, I just knew everyone was like me; they didn’t know anybody either and I was just so excited and happy. I think my enthusiasm helped me make a lot of friends,” she says. “Back home, I was an outcast. My interests were so different, but here there are lots of people who like the same things I do.”

“I decided I wanted to travel for myself and try new things,” she says. “I needed that break.” Then she got serious and headed back to school with a decade of practical work experience under her belt. “The University of Utah is really good for non-traditional students,” she says. “They don’t expect me to join sorority or do a bunch of activities.” During her previous life, she had lived near Trolley Square but traveled so much that she never really got to know the city. When she opted to resume her studies, she deliberately chose to locate herself in the artsy Pierpont Area of downtown.

Hernandez lives near 300 South and 600 East and loves walking downtown to school every day, explaining that she “grew up in this suburban area where it took a 30-minute drive to get anywhere. I love using my legs.”

“I am such a city girl,” she says. “I love walkable neighborhoods and I love the buzz. I walk to the Farmers Market, to restaurants and like the sense of community here. I like knowing the restaurant owners and people at the businesses I frequent.”

When she’s not hard hitting the books, she’s exploring her new city. “There is always something to do, always a new place to discover, some little crevasse that becomes our new hangout spot. It continues to blow my mind.”

“Most of my friends live between downtown and Sugar House,” she says. “Everybody bikes to everything, and I just love that there is this awareness towards greener healthier lifestyles. I like that that’s the norm here.”