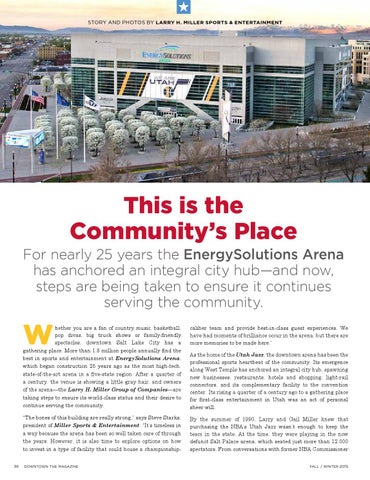 This is the Community’s Place For nearly 25 years the EnergySolutions Arena has anchored an integral city hub—and now, steps are being taken to ensure it continues serving the community.

hether you are a fan of country music, basketball, pop divas, big truck shows or family-friendly spectacles, downtown Salt Lake City has a gathering place. More than 1.8 million people annually find the best in sports and entertainment at EnergySolutions Arena, which began construction 25 years ago as the most high-tech, state-of-the-art arena in a five-state region. After a quarter of a century, the venue is showing a little gray hair, and owners of the arena—the Larry H. Miller Group of Companies—are taking steps to ensure its world-class status and their desire to continue serving the community.

caliber team and provide best-in-class guest experiences. We have had moments of brilliance occur in the arena, but there are more memories to be made here.”

“The bones of this building are really strong,” says Steve Starks, president of Miller Sports & Entertainment. “It’s timeless in a way because the arena has been so well taken care of through the years. However, it is also time to explore options on how to invest in a type of facility that could house a championship-

By the summer of 1990, Larry and Gail Miller knew that purchasing the NBA’s Utah Jazz wasn’t enough to keep the team in the state. At the time, they were playing in the now defunct Salt Palace arena, which seated just more than 12,000 spectators. From conversations with former NBA Commissioner

As the home of the Utah Jazz, the downtown arena has been the professional sports heartbeat of the community. Its emergence along West Temple has anchored an integral city hub, spawning new businesses, restaurants, hotels and shopping, light-rail connectors, and its complementary facility to the convention center. Its rising a quarter of a century ago to a gathering place for first-class entertainment in Utah was an act of personal sheer will.