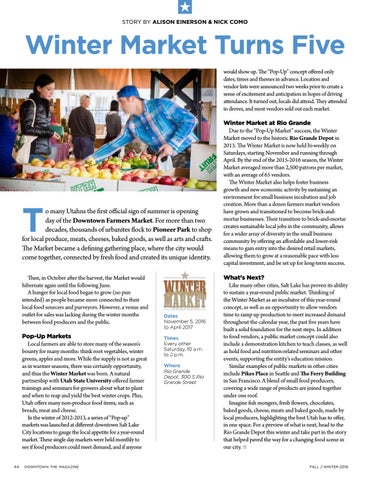 Winter Market Turns Five would show up. The “Pop-Up” concept offered only dates, times and themes in advance. Location and vendor lists were announced two weeks prior to create a sense of excitement and anticipation in hopes of driving attendance. It turned out, locals did attend. They attended in droves, and most vendors sold out each market.

o many Utahns the first official sign of summer is opening day of the Downtown Farmers Market. For more than two decades, thousands of urbanites flock to Pioneer Park to shop for local produce, meats, cheeses, baked goods, as well as arts and crafts. The Market became a defining gathering place, where the city would come together, connected by fresh food and created its unique identity.

Then, in October after the harvest, the Market would hibernate again until the following June. A hunger for local food began to grow (no pun intended) as people became more connected to their local food sourcers and purveyors. However, a venue and outlet for sales was lacking during the winter months between food producers and the public. Pop-Up Markets Local farmers are able to store many of the season’s bounty for many months: think root vegetables, winter greens, apples and more. While the supply is not as great as in warmer seasons, there was certainly opportunity, and thus the Winter Market was born. A natural partnership with Utah State University offered farmer trainings and seminars for growers about what to plant and when to reap and yield the best winter crops. Plus, Utah offers many non-produce food items, such as breads, meat and cheese. In the winter of 2012-2013, a series of “Pop-up” markets was launched at different downtown Salt Lake City locations to gauge the local appetite for a year-round market. These single day markets were held monthly to see if food producers could meet demand, and if anyone 44

Winter Market at Rio Grande Due to the “Pop-Up Market” success, the Winter Market moved to the historic Rio Grande Depot in 2013. The Winter Market is now held bi-weekly on Saturdays, starting November and running through April. By the end of the 2015-2016 season, the Winter Market averaged more than 2,500 patrons per market, with an average of 65 vendors. The Winter Market also helps foster business growth and new economic activity by sustaining an environment for small business incubation and job creation. More than a dozen farmers market vendors have grown and transitioned to become brick-andmortar businesses. Their transition to brick-and-mortar creates sustainable local jobs in the community, allows for a wider array of diversity in the small business community by offering an affordable and lower-risk means to gain entry into the desired retail markets, allowing them to grow at a reasonable pace with less capital investment, and be set up for long-term success. What’s Next? Like many other cities, Salt Lake has proven its ability to sustain a year-round public market. Thinking of the Winter Market as an incubator of this year-round concept, as well as an opportunity to allow vendors time to ramp up production to meet increased demand throughout the calendar year, the past five years have built a solid foundation for the next steps. In addition to food vendors, a public market concept could also include a demonstration kitchen to teach classes, as well as hold food and nutrition-related seminars and other events, supporting the entity’s education mission. Similar examples of public markets in other cities include Pikes Place in Seattle and The Ferry Building in San Francisco. A blend of small food producers, covering a wide range of products are joined together under one roof. Imagine fish mongers, fresh flowers, chocolates, baked goods, cheese, meats and baked goods, made by local producers, highlighting the best Utah has to offer, in one space. For a preview of what is next, head to the Rio Grande Depot this winter and take part in the story that helped paved the way for a changing food scene in our city. I fall / winter 2016