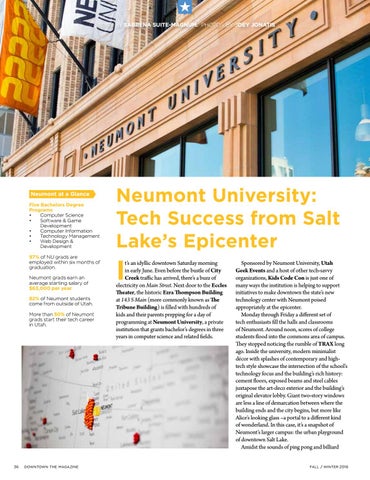 t’s an idyllic downtown Saturday morning in early June. Even before the bustle of City Creek traffic has arrived, there’s a buzz of electricity on Main Street. Next door to the Eccles Theater, the historic Ezra Thompson Building at 143 S Main (more commonly known as The Tribune Building) is filled with hundreds of kids and their parents prepping for a day of programming at Neumont University, a private institution that grants bachelor’s degrees in three years in computer science and related fields.

Sponsored by Neumont University, Utah Geek Events and a host of other tech-savvy organizations, Kids Code Con is just one of many ways the institution is helping to support initiatives to make downtown the state’s new technology center with Neumont poised appropriately at the epicenter. Monday through Friday a different set of tech enthusiasts fill the halls and classrooms of Neumont. Around noon, scores of college students flood into the commons area of campus. They stopped noticing the rumble of TRAX long ago. Inside the university, modern minimalist décor with splashes of contemporary and hightech style showcase the intersection of the school’s technology focus and the building’s rich history: cement floors, exposed beams and steel cables juxtapose the art-deco exterior and the building’s original elevator lobby. Giant two-story windows are less a line of demarcation between where the building ends and the city begins, but more like Alice’s looking glass –a portal to a different kind of wonderland. In this case, it’s a snapshot of Neumont’s larger campus: the urban playground of downtown Salt Lake. Amidst the sounds of ping pong and billiard fall / winter 2016