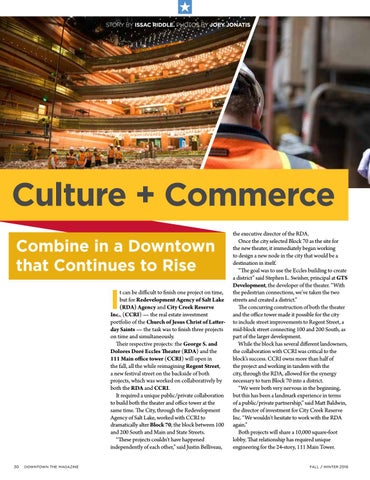 Culture + Commerce Combine in a Downtown that Continues to Rise

t can be difficult to finish one project on time, but for Redevelopment Agency of Salt Lake (RDA) Agency and City Creek Reserve Inc., (CCRI) — the real estate investment portfolio of the Church of Jesus Christ of Latterday Saints — the task was to finish three projects on time and simultaneously. Their respective projects: the George S. and Dolores Doré Eccles Theater (RDA) and the 111 Main office tower (CCRI) will open in the fall, all the while reimagining Regent Street, a new festival street on the backside of both projects, which was worked on collaboratively by both the RDA and CCRI. It required a unique public/private collaboration to build both the theater and office tower at the same time. The City, through the Redevelopment Agency of Salt Lake, worked with CCRI to dramatically alter Block 70, the block between 100 and 200 South and Main and State Streets. “These projects couldn’t have happened independently of each other,” said Justin Belliveau, 30

the executive director of the RDA. Once the city selected Block 70 as the site for the new theater, it immediately began working to design a new node in the city that would be a destination in itself. “The goal was to use the Eccles building to create a district” said Stephen L. Swisher, principal at GTS Development, the developer of the theater. “With the pedestrian connections, we’ve taken the two streets and created a district.” The concurring construction of both the theater and the office tower made it possible for the city to include street improvements to Regent Street, a mid-block street connecting 100 and 200 South, as part of the larger development. While the block has several different landowners, the collaboration with CCRI was critical to the block’s success. CCRI owns more than half of the project and working in tandem with the city, through the RDA, allowed for the synergy necessary to turn Block 70 into a district. “We were both very nervous in the beginning, but this has been a landmark experience in terms of a public/private partnership,” said Matt Baldwin, the director of investment for City Creek Reserve Inc. “We wouldn’t hesitate to work with the RDA again.” Both projects will share a 10,000 square-foot lobby. That relationship has required unique engineering for the 24-story, 111 Main Tower. fall / winter 2016