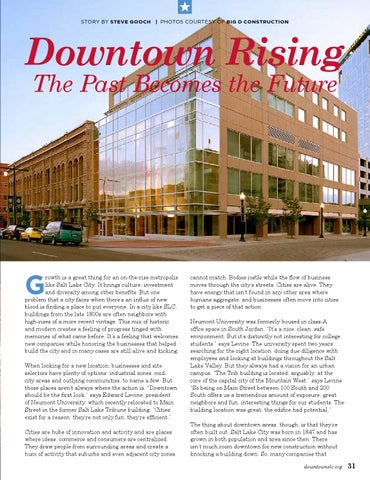 Downtown Rising The Past Becomes the Future

rowth is a great thing for an on-the-rise metropolis like Salt Lake City. It brings culture, investment and diversity among other benefits. But one problem that a city faces when there’s an influx of new blood is finding a place to put everyone. In a city like SLC, buildings from the late 1800s are often neighbors with high-rises of a more recent vintage. This mix of historic and modern creates a feeling of progress tinged with memories of what came before. It’s a feeling that welcomes new companies while honoring the businesses that helped build the city and in many cases are still alive and kicking. When looking for a new location, businesses and site selectors have plenty of options: industrial zones, midcity areas and outlying communities, to name a few. But those places aren’t always where the action is. “Downtown should be the first look,” says Edward Levine, president of Neumont University, which recently relocated to Main Street in the former Salt Lake Tribune building. “Cities exist for a reason; they’re not only fun, they’re efficient.” Cities are hubs of innovation and activity and are places where ideas, commerce and consumers are centralized. They draw people from surrounding areas and create a hum of activity that suburbs and even adjacent city zones

cannot match. Bodies jostle while the flow of business moves through the city’s streets. Cities are alive. They have energy that isn’t found in any other area where humans aggregate, and businesses often move into cities to get a piece of that action. Neumont University was formerly housed in class-A office space in South Jordan. “It’s a nice, clean, safe environment. But it’s distinctly not interesting for college students,” says Levine. The university spent two years searching for the right location, doing due diligence with employees and looking at buildings throughout the Salt Lake Valley. But they always had a vision for an urban campus. “The Trib building is located, arguably, at the core of the capital city of the Mountain West,” says Levine. “So being on Main Street between 100 South and 200 South offers us a tremendous amount of exposure, great neighbors and fun, interesting things for our students. The building location was great; the edifice had potential.” The thing about downtown areas, though, is that they’re often built out. Salt Lake City was born in 1847 and has grown in both population and area since then. There isn’t much room downtown for new construction without knocking a building down. So, many companies that downtownslc.org