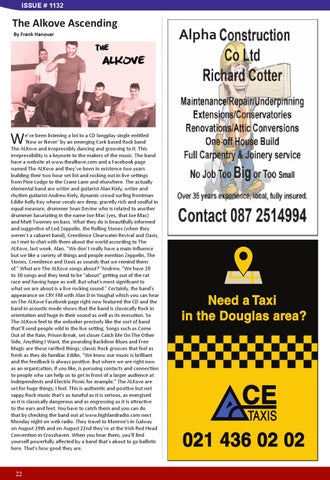 The Alkove Ascending By Frank Hanover

e’ve been listening a lot to a CD longplay single entitled ‘Now or Never’ by an emerging Cork based Rock band The ALKove and irrepressibly dancing and grooving to it. This irrepressibility is a keynote to the makers of the music. The band have a website at www.thealkove.com and a Facebook page named The ALKove and they’ve been in existence two years building their two hour set list and rocking out in live settings from Pine Lodge to the Crane Lane and elsewhere. The actually elemental band are writer and guitarist Alan Kiely, writer and rhythm guitarist Andrew Kiely, dynamic crowd surfing frontman Eddie Kelly Koy whose vocals are deep, gravelly rich and soulful in equal measure, drummer Sean Devine who is related to another drummer luxuriating in the name Joe Mac (yes, that Joe Mac) and Matt Twomey on bass. What they do is beautifully informed and suggestive of Led Zeppelin, the Rolling Stones (when they weren’t a cabaret band), Creedence Clearwater Revival and Oasis, so I met to chat with them about the world according to The ALKove, last week. Alan, “We don’t really have a main influence but we like a variety of things and people mention Zeppelin, The Stones, Creedence and Oasis as sounds that we remind them of.” What are The ALKove songs about? “Andrew, “We have 20 to 30 songs and they tend to be “about” getting out of the rat race and having hope as well. But what’s most significant to what we are about is a live rocking sound.” Certainly, the band’s appearance on CRY FM with Alan D in Youghal which you can hear on The ALKove Facebook page right now featured the CD and the band in acoustic mode shows that the band is classically Rock in orientation and huge in their sound as well as its execution. So The ALKove feel to the onlooker precisely like the sort of band that’ll send people wild in the live setting. Songs such as Come Out of the Rain, Prison Break, set closer Catch Me On The Other Side, Anything I Want, the pounding Backdoor Blues and Free Magic are those rarified things; classic Rock grooves that feel as fresh as they do familiar. Eddie, “We know our music is brilliant and the feedback is always positive. But where we are right now as an organization, if you like, is pursuing contacts and connection to people who can help us to get in front of a larger audience at Indiependents and Electric Picnic for example.” The ALKove are set for huge things, I feel. This is authentic and positive but not sappy Rock music that’s as tuneful as it is serious, as energised as it is classically dangerous and as engrossing as it is attractive to the ears and feet. You have to catch them and you can do that by checking the band out at www.highlandradio.com next Monday night on web radio. They travel to Monroe’s in Galway on August 29th and on August 22nd they’re at the Irish Red Head Convention in Crosshaven. When you hear them, you’ll find yourself powerfully affected by a band that’s about to go ballistic here. That’s how good they are.