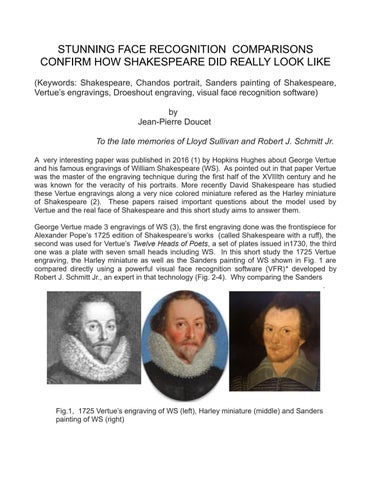 STUNNING FACE RECOGNITION COMPARISONS CONFIRM HOW SHAKESPEARE DID REALLY LOOK LIKE (Keywords: Shakespeare, Chandos portrait, Sanders painting of Shakespeare, Vertue’s engravings, Droeshout engraving, visual face recognition software) by Jean-Pierre Doucet To the late memories of Lloyd Sullivan and Robert J. Schmitt Jr. A very interesting paper was published in 2016 (1) by Hopkins Hughes about George Vertue and his famous engravings of William Shakespeare (WS). As pointed out in that paper Vertue was the master of the engraving technique during the first half of the XVIIIth century and he was known for the veracity of his portraits. More recently David Shakespeare has studied these Vertue engravings along a very nice colored miniature refered as the Harley miniature of Shakespeare (2). These papers raised important questions about the model used by Vertue and the real face of Shakespeare and this short study aims to answer them. George Vertue made 3 engravings of WS (3), the first engraving done was the frontispiece for Alexander Pope’s 1725 edition of Shakespeare’s works (called Shakespeare with a ruff), the second was used for Vertue’s Twelve Heads of Poets, a set of plates issued in1730, the third one was a plate with seven small heads including WS. In this short study the 1725 Vertue engraving, the Harley miniature as well as the Sanders painting of WS shown in Fig. 1 are compared directly using a powerful visual face recognition software (VFR)* developed by Robert J. Schmitt Jr., an expert in that technology (Fig. 2-4). Why comparing the Sanders .

painting? Because the well-known Sanders painting has a very good history and passed successfully through all possible scientific tests (4). First of all, in Fig. 1, it is obvious that the sitters in the Vertue’s engraving and in the Harley miniature are a little older than the sitter in the Sanders painting so for instance the degree of baldness and the beard growth are more important in the Vertue and the Harley artworks. Also note that this VFR approach has been used already successfully to compare the Sanders painting of WS with the the most accepted portrait of WS i.e. the Droeshout engraving of WS which appeared in the First Folio (1623) (5), the Hilliard’s miniature of WS (6) and the Stratford portrait (7). As we can already see and as it is pointed out also by Hopkins Hughes (1), it is obvious that Vertue did not use the Chandos portrait as model in this engraving. And Vertue in his constant search of truthfullness in his works was right to do so. We have also shown previously that the sitter in the Chandos portrait has nothing to do with WS (5,8). Then what is the model used by Vertue? The results of this Vertue engraving-Harley miniature comparison are shown in Fig. 2.

THE MODEL USED FOR THE 1725 VERTUE ENGRAVING

Fig. 2, Screen captures of the VFR comparison of the 1725 Vertue engraving of WS and the Harley miniature, side by side (left) and overlay (right).

The VFR software result in Fig. 2 left panel shows both images side by side but the VFR has also the full capability to do automatically a full overlay of these pictures as shown in Fig. 2 right panel. These results described cannot be more striking. This is certainly the most

important Art related face recognition explicit matching ever described. All the facial features do fit like a glove. As it was also mentioned by Hopkins Hughes (1), there is no doubt that Vertue used the Harley miniature as model for his 1725 engraving. The overlay in Fig.2 is the best proof of Vertue genius skill as well as the amazing performance of the VFR used in this study. The big issue pointed out in ref. 1-2 is who is the sitter in these two artworks? In the Fig. 1 already at first sight, the physionomy of each sitter highly suggest that there is a connection between the 1725 Vertue engraving, the Harley miniature and the Sanders painting. And the Fig. 3 and 4 do confirm that claim.

SHAKESPEARE FINALLY IDENTIFIED The Fig. 3 described the VFR results following the comparison of the 1725 Vertue engraving and the Sanders painting of WS.

Fig. 3, Screen captures of the VFR comparison of 1725 Vertue engraving of WS and the Sanders painting of WS (flipped), side by side (left) and overlay (right). The colored dots displayed are described in the text.

In Fig. 3 left panel, many common facial features are indeed observed including : same sizes of the eyes and the nose areas, overlay of the nose, overlay of the mouth, similar thin eyebrows, similar cheeks, forehead, same head contour, baldness pattern and similar hair style. Following the VFR overlay, the Vertue’s engraving is now appearing with the Sanders painting blue eyes. And all the similarities mentioned previously and differences become more obvious

Fig. 4,Screen captures of the VFR comparison of the Harley miniature and the Sanders painting of WS (flipped), side by side (left) and overlay (right). The colored dots displayed are described in the text.

As said previously. Vertue was the master engraver of the first half of XVIIIth century and was known for his constant search of truthfullness in his works. The Vertue engraving used for his Twelve Heads of Poets shows WS at an older age, the model used is unknown, but it fit also very well following a VFR overlay with the Sanders painting (Fig. 5) except at the level of the mouth which is slightly lower due to the normal philtrum elongation with aging (see ref. 9). And by the way too, this 1730 Vertue engraving fit also perfectly when compared to the Droeshout engraving (Fig. 6). As expected the mouth in the Droeshout engraving is a bit

lower again due to the normal philtrum elongation with aging. These VFR results with the 1730 Vertue engraving do confirm our previous study showing that the Sanders painting was highly related to the Droeshout engraving (5). At the same time, this 1730 Vertue do fill a

Fig. 5, Screen captures of the VFR comparison of the 1730 Vertue engraving with the Sanders painting. Side by side (left) and overlay (right).

Fig. 6, Screen captures of the VFR comparison of the 1730 Vertue engraving and the Droeshout engaving. Side by side (left) and overlay (right).

good part of the physiognomy gap between the Sanders painting, the Harley miniature/1725 Vertue engraving and the famous Droeshout engraving during Shakespeare lifespan. In preliminary search, none of the other VFR portrait comparisons of many famous poets, actors, patrons or other noblemen of WS time and available on the web was a match even close to the results obtained in this study (data not shown). So with such VFR straigthforward results there is only one possible conclusion: the Harley miniature, both Vertue engravings as well as the Droeshout engraving do described the same sitter, the one also appearing in the Sanders painting i.e. The Bard. ACKNOWLEDGMENT: I will be forever grateful to Daniel Fischlin and to the late Loydd Sullivan for the opportunity to study the Sanders painting of Shakespeare. * The concept behind that powerful tool is very simple as Robert Schmitt described it (and we summarize) (see ref. 5): - by finding (and clicking) the center of the eyes on both images with the help of a magnifier that one can move with a mouse, the software is able to normalize the images; - if necessary, the software also rotates the faces as best as possible and the eyes are put on the same horizontal plane; - then the pictures are placed so that a direct comparison can be done by sliding each image overeach other as the user sees fit; - a full overlay of the pictures can also be done with the software allowing for even closer comparison. So the main basis of the VFR software is to adjust each picture to the same interpupillary distance (IPD) because in adulthood the IPD is a constant value. Just two mouse clics in each of the two images and the rest is done automatically. REFERENCES 1. Hopkins-Hughes S., George Vertue and Shakespeare’s face, https://politicworm.com/oxford-shakespeare/expanding-the-question/vizualizing-shakespearea-tale-oftwo-portraits/george-vertue-and-shakespeares-face/. 2. Shakespeare D., (2021) Is this the face of Shakespeare?, https://deveresociety.co.uk/wpcontent/uploads/2015/12/Is-this-the-face-of-Shakespeare-.pdf 3. Walpole H., (1794) A Catalogue of Engravers,who have been born, or resided in England, London, J. Caulfield, T. Coram and G. Barrett eds. 284 pages. 4. Nolen S., (2002) Shakespeare’s Face, Knopf Canada, 384 pages. 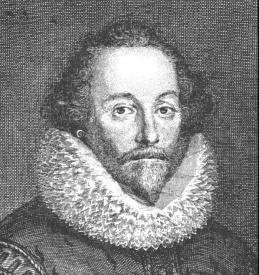