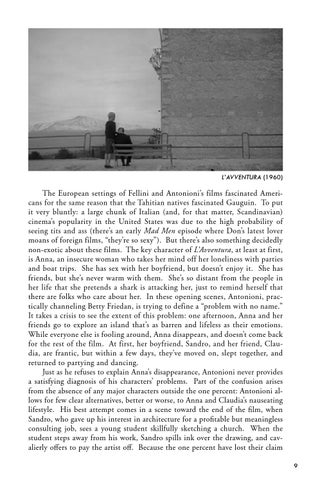 The European settings of Fellini and Antonioni’s films fascinated Americans for the same reason that the Tahitian natives fascinated Gauguin. To put it very bluntly: a large chunk of Italian (and, for that matter, Scandinavian) cinema’s popularity in the United States was due to the high probability of seeing tits and ass (there’s an early Mad Men episode where Don’s latest lover moans of foreign films, “they’re so sexy”). But there’s also something decidedly non-exotic about these films. The key character of L’Avventura, at least at first, is Anna, an insecure woman who takes her mind off her loneliness with parties and boat trips. She has sex with her boyfriend, but doesn’t enjoy it. She has friends, but she’s never warm with them. She’s so distant from the people in her life that she pretends a shark is attacking her, just to remind herself that there are folks who care about her. In these opening scenes, Antonioni, practically channeling Betty Friedan, is trying to define a “problem with no name.” It takes a crisis to see the extent of this problem: one afternoon, Anna and her friends go to explore an island that’s as barren and lifeless as their emotions. While everyone else is fooling around, Anna disappears, and doesn’t come back for the rest of the film. At first, her boyfriend, Sandro, and her friend, Claudia, are frantic, but within a few days, they’ve moved on, slept together, and returned to partying and dancing. Just as he refuses to explain Anna’s disappearance, Antonioni never provides a satisfying diagnosis of his characters’ problems. Part of the confusion arises from the absence of any major characters outside the one percent: Antonioni allows for few clear alternatives, better or worse, to Anna and Claudia’s nauseating lifestyle. His best attempt comes in a scene toward the end of the film, when Sandro, who gave up his interest in architecture for a profitable but meaningless consulting job, sees a young student skillfully sketching a church. When the student steps away from his work, Sandro spills ink over the drawing, and cavalierly offers to pay the artist off. Because the one percent have lost their claim 9