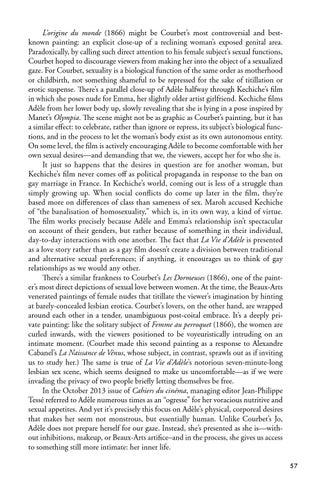 L’origine du monde (1866) might be Courbet’s most controversial and bestknown painting: an explicit close-up of a reclining woman’s exposed genital area. Paradoxically, by calling such direct attention to his female subject’s sexual functions, Courbet hoped to discourage viewers from making her into the object of a sexualized gaze. For Courbet, sexuality is a biological function of the same order as motherhood or childbirth, not something shameful to be repressed for the sake of titillation or erotic suspense. There’s a parallel close-up of Adèle halfway through Kechiche’s film in which she poses nude for Emma, her slightly older artist girlfriend. Kechiche films Adèle from her lower body up, slowly revealing that she is lying in a pose inspired by Manet’s Olympia. The scene might not be as graphic as Courbet’s painting, but it has a similar effect: to celebrate, rather than ignore or repress, its subject’s biological functions, and in the process to let the woman’s body exist as its own autonomous entity. On some level, the film is actively encouraging Adèle to become comfortable with her own sexual desires—and demanding that we, the viewers, accept her for who she is. It just so happens that the desires in question are for another woman, but Kechiche’s film never comes off as political propaganda in response to the ban on gay marriage in France. In Kechiche’s world, coming out is less of a struggle than simply growing up. When social conflicts do come up later in the film, they’re based more on differences of class than sameness of sex. Maroh accused Kechiche of “the banalisation of homosexuality,” which is, in its own way, a kind of virtue. The film works precisely because Adèle and Emma’s relationship isn’t spectacular on account of their genders, but rather because of something in their individual, day-to-day interactions with one another. The fact that La Vie d’Adèle is presented as a love story rather than as a gay film doesn’t create a division between traditional and alternative sexual preferences; if anything, it encourages us to think of gay relationships as we would any other. There’s a similar frankness to Courbet’s Les Dormeuses (1866), one of the painter’s most direct depictions of sexual love between women. At the time, the Beaux-Arts venerated paintings of female nudes that titillate the viewer’s imagination by hinting at barely-concealed lesbian erotica. Courbet’s lovers, on the other hand, are wrapped around each other in a tender, unambiguous post-coital embrace. It’s a deeply private painting: like the solitary subject of Femme au perroquet (1866), the women are curled inwards, with the viewers positioned to be voyeuristically intruding on an intimate moment. (Courbet made this second painting as a response to Alexandre Cabanel’s La Naissance de Vénus, whose subject, in contrast, sprawls out as if inviting us to study her.) The same is true of La Vie d’Adèle’s notorious seven-minute-long lesbian sex scene, which seems designed to make us uncomfortable—as if we were invading the privacy of two people briefly letting themselves be free. In the October 2013 issue of Cahiers du cinéma, managing editor Jean-Philippe Tessé referred to Adèle numerous times as an “ogresse” for her voracious nutritive and sexual appetites. And yet it’s precisely this focus on Adèle’s physical, corporeal desires that makes her seem not monstrous, but essentially human. Unlike Courbet’s Jo, Adèle does not prepare herself for our gaze. Instead, she’s presented as she is—without inhibitions, makeup, or Beaux-Arts artifice–and in the process, she gives us access to something still more intimate: her inner life. 57