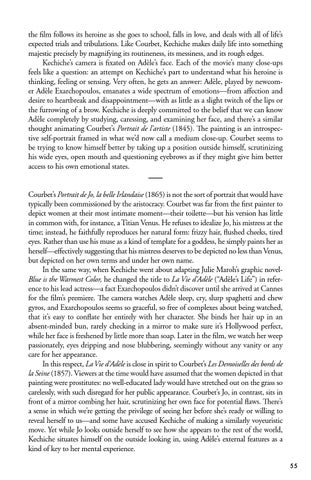 the film follows its heroine as she goes to school, falls in love, and deals with all of life’s expected trials and tribulations. Like Courbet, Kechiche makes daily life into something majestic precisely by magnifying its routineness, its messiness, and its rough edges. Kechiche’s camera is fixated on Adèle’s face. Each of the movie’s many close-ups feels like a question: an attempt on Kechiche’s part to understand what his heroine is thinking, feeling or sensing. Very often, he gets an answer: Adèle, played by newcomer Adèle Exarchopoulos, emanates a wide spectrum of emotions—from affection and desire to heartbreak and disappointment—with as little as a slight twitch of the lips or the furrowing of a brow. Kechiche is deeply committed to the belief that we can know Adèle completely by studying, caressing, and examining her face, and there’s a similar thought animating Courbet’s Portrait de l’artiste (1845). The painting is an introspective self-portrait framed in what we’d now call a medium close-up. Courbet seems to be trying to know himself better by taking up a position outside himself, scrutinizing his wide eyes, open mouth and questioning eyebrows as if they might give him better access to his own emotional states. Courbet’s Portrait de Jo, la belle Irlandaise (1865) is not the sort of portrait that would have typically been commissioned by the aristocracy. Courbet was far from the first painter to depict women at their most intimate moment—their toilette—but his version has little in common with, for instance, a Titian Venus. He refuses to idealize Jo, his mistress at the time; instead, he faithfully reproduces her natural form: frizzy hair, flushed cheeks, tired eyes. Rather than use his muse as a kind of template for a goddess, he simply paints her as herself—effectively suggesting that his mistress deserves to be depicted no less than Venus, but depicted on her own terms and under her own name. In the same way, when Kechiche went about adapting Julie Maroh’s graphic novelBlue is the Warmest Color, he changed the title to La Vie d’Adèle (“Adèle’s Life”) in reference to his lead actress—a fact Exarchopoulos didn’t discover until she arrived at Cannes for the film’s premiere. The camera watches Adèle sleep, cry, slurp spaghetti and chew gyros, and Exarchopoulos seems so graceful, so free of complexes about being watched, that it’s easy to conflate her entirely with her character. She binds her hair up in an absent-minded bun, rarely checking in a mirror to make sure it’s Hollywood perfect, while her face is freshened by little more than soap. Later in the film, we watch her weep passionately, eyes dripping and nose blubbering, seemingly without any vanity or any care for her appearance. In this respect, La Vie d’Adèle is close in spirit to Courbet’s Les Demoiselles des bords de la Seine (1857). Viewers at the time would have assumed that the women depicted in that painting were prostitutes: no well-educated lady would have stretched out on the grass so carelessly, with such disregard for her public appearance. Courbet’s Jo, in contrast, sits in front of a mirror combing her hair, scrutinizing her own face for potential flaws. There’s a sense in which we’re getting the privilege of seeing her before she’s ready or willing to reveal herself to us—and some have accused Kechiche of making a similarly voyeuristic move. Yet while Jo looks outside herself to see how she appears to the rest of the world, Kechiche situates himself on the outside looking in, using Adèle’s external features as a kind of key to her mental experience. 55