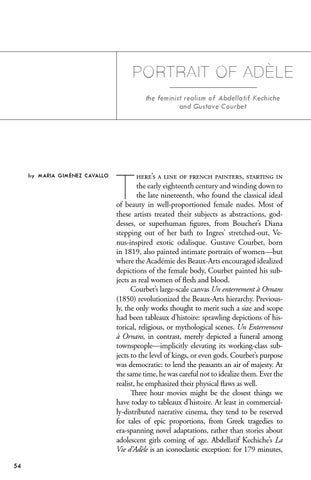 here’s a line of french painters, starting in the early eighteenth century and winding down to the late nineteenth, who found the classical ideal of beauty in well-proportioned female nudes. Most of these artists treated their subjects as abstractions, goddesses, or superhuman figures, from Boucher’s Diana stepping out of her bath to Ingres’ stretched-out, Venus-inspired exotic odalisque. Gustave Courbet, born in 1819, also painted intimate portraits of women—but where the Académie des Beaux-Arts encouraged idealized depictions of the female body, Courbet painted his subjects as real women of flesh and blood. Courbet’s large-scale canvas Un enterrement à Ornans (1850) revolutionized the Beaux-Arts hierarchy. Previously, the only works thought to merit such a size and scope had been tableaux d’histoire: sprawling depictions of historical, religious, or mythological scenes. Un Enterrement à Ornans, in contrast, merely depicted a funeral among townspeople—implicitly elevating its working-class subjects to the level of kings, or even gods. Courbet’s purpose was democratic: to lend the peasants an air of majesty. At the same time, he was careful not to idealize them. Ever the realist, he emphasized their physical flaws as well. Three hour movies might be the closest things we have today to tableaux d’histoire. At least in commercially-distributed narrative cinema, they tend to be reserved for tales of epic proportions, from Greek tragedies to era-spanning novel adaptations, rather than stories about adolescent girls coming of age. Abdellatif Kechiche’s La Vie d’Adèle is an iconoclastic exception: for 179 minutes,