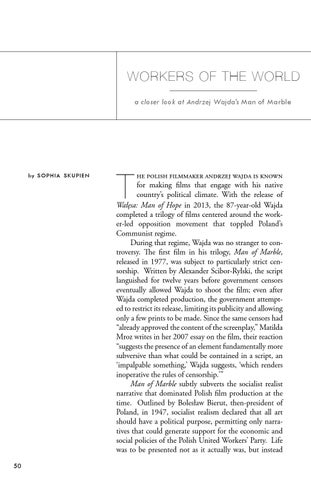 he polish filmmaker andrzej wajda is known for making films that engage with his native country’s political climate. With the release of Wałęsa: Man of Hope in 2013, the 87-year-old Wajda completed a trilogy of films centered around the worker-led opposition movement that toppled Poland’s Communist regime. During that regime, Wajda was no stranger to controversy. The first film in his trilogy, Man of Marble, released in 1977, was subject to particularly strict censorship. Written by Alexander Scibor-Rylski, the script languished for twelve years before government censors eventually allowed Wajda to shoot the film; even after Wajda completed production, the government attempted to restrict its release, limiting its publicity and allowing only a few prints to be made. Since the same censors had “already approved the content of the screenplay,” Matilda Mroz writes in her 2007 essay on the film, their reaction “suggests the presence of an element fundamentally more subversive than what could be contained in a script, an ‘impalpable something,’ Wajda suggests, ‘which renders inoperative the rules of censorship.’” Man of Marble subtly subverts the socialist realist narrative that dominated Polish film production at the time. Outlined by Bolesław Bierut, then-president of Poland, in 1947, socialist realism declared that all art should have a political purpose, permitting only narratives that could generate support for the economic and social policies of the Polish United Workers’ Party. Life was to be presented not as it actually was, but instead