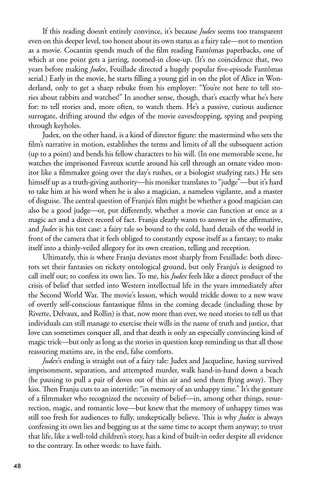 If this reading doesn’t entirely convince, it’s because Judex seems too transparent even on this deeper level, too honest about its own status as a fairy tale—not to mention as a movie. Cocantin spends much of the film reading Fantômas paperbacks, one of which at one point gets a jarring, zoomed-in close-up. (It’s no coincidence that, two years before making Judex, Feuillade directed a hugely popular five-episode Fantômas serial.) Early in the movie, he starts filling a young girl in on the plot of Alice in Wonderland, only to get a sharp rebuke from his employer: “You’re not here to tell stories about rabbits and watches!” In another sense, though, that’s exactly what he’s here for: to tell stories and, more often, to watch them. He’s a passive, curious audience surrogate, drifting around the edges of the movie eavesdropping, spying and peeping through keyholes. Judex, on the other hand, is a kind of director figure: the mastermind who sets the film’s narrative in motion, establishes the terms and limits of all the subsequent action (up to a point) and bends his fellow characters to his will. (In one memorable scene, he watches the imprisoned Favreux scuttle around his cell through an ornate video monitor like a filmmaker going over the day’s rushes, or a biologist studying rats.) He sets himself up as a truth-giving authority—his moniker translates to “judge”—but it’s hard to take him at his word when he is also a magician, a nameless vigilante, and a master of disguise. The central question of Franju’s film might be whether a good magician can also be a good judge—or, put differently, whether a movie can function at once as a magic act and a direct record of fact. Franju clearly wants to answer in the affirmative, and Judex is his test case: a fairy tale so bound to the cold, hard details of the world in front of the camera that it feels obliged to constantly expose itself as a fantasy; to make itself into a thinly-veiled allegory for its own creation, telling and reception. Ultimately, this is where Franju deviates most sharply from Feuillade: both directors set their fantasies on rickety ontological ground, but only Franju’s is designed to call itself out; to confess its own lies. To me, his Judex feels like a direct product of the crisis of belief that settled into Western intellectual life in the years immediately after the Second World War. The movie’s lesson, which would trickle down to a new wave of overtly self-conscious fantastique films in the coming decade (including those by Rivette, Delvaux, and Rollin) is that, now more than ever, we need stories to tell us that individuals can still manage to exercise their wills in the name of truth and justice, that love can sometimes conquer all, and that death is only an especially convincing kind of magic trick—but only as long as the stories in question keep reminding us that all those reassuring maxims are, in the end, false comforts. Judex’s ending is straight out of a fairy tale: Judex and Jacqueline, having survived imprisonment, separation, and attempted murder, walk hand-in-hand down a beach (he pausing to pull a pair of doves out of thin air and send them flying away). They kiss. Then Franju cuts to an intertitle: “in memory of an unhappy time.” It’s the gesture of a filmmaker who recognized the necessity of belief—in, among other things, resurrection, magic, and romantic love—but knew that the memory of unhappy times was still too fresh for audiences to fully, unskeptically believe. This is why Judex is always confessing its own lies and begging us at the same time to accept them anyway; to trust that life, like a well-told children’s story, has a kind of built-in order despite all evidence to the contrary. In other words: to have faith. 48