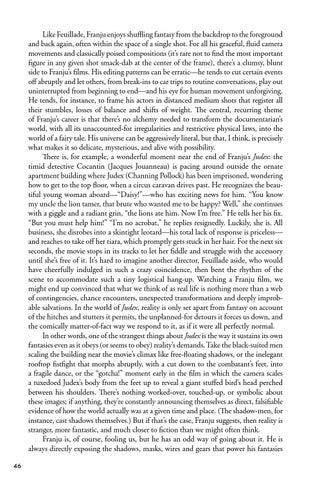 Like Feuillade, Franju enjoys shuffling fantasy from the backdrop to the foreground and back again, often within the space of a single shot. For all his graceful, fluid camera movements and classically poised compositions (it’s rare not to find the most important figure in any given shot smack-dab at the center of the frame), there’s a clumsy, blunt side to Franju’s films. His editing patterns can be erratic—he tends to cut certain events off abruptly and let others, from break-ins to car trips to routine conversations, play out uninterrupted from beginning to end—and his eye for human movement unforgiving. He tends, for instance, to frame his actors in distanced medium shots that register all their stumbles, losses of balance and shifts of weight. The central, recurring theme of Franju’s career is that there’s no alchemy needed to transform the documentarian’s world, with all its unaccounted-for irregularities and restrictive physical laws, into the world of a fairy tale. His universe can be aggressively literal, but that, I think, is precisely what makes it so delicate, mysterious, and alive with possibility. There is, for example, a wonderful moment near the end of Franju’s Judex: the timid detective Cocantin (Jacques Jouanneau) is pacing around outside the ornate apartment building where Judex (Channing Pollock) has been imprisoned, wondering how to get to the top floor, when a circus caravan drives past. He recognizes the beautiful young woman aboard—“Daisy!”—who has exciting news for him. “You know my uncle the lion tamer, that brute who wanted me to be happy? Well,” she continues with a giggle and a radiant grin, “the lions ate him. Now I’m free.” He tells her his fix. “But you must help him!” “I’m no acrobat,” he replies resignedly. Luckily, she is. All business, she disrobes into a skintight leotard—his total lack of response is priceless— and reaches to take off her tiara, which promptly gets stuck in her hair. For the next six seconds, the movie stops in its tracks to let her fiddle and struggle with the accessory until she’s free of it. It’s hard to imagine another director, Feuillade aside, who would have cheerfully indulged in such a crazy coincidence, then bent the rhythm of the scene to accommodate such a tiny logistical hang-up. Watching a Franju film, we might end up convinced that what we think of as real life is nothing more than a web of contingencies, chance encounters, unexpected transformations and deeply improbable salvations. In the world of Judex, reality is only set apart from fantasy on account of the hitches and stutters it permits, the unplanned-for detours it forces us down, and the comically matter-of-fact way we respond to it, as if it were all perfectly normal. In other words, one of the strangest things about Judex is the way it sustains its own fantasies even as it obeys (or seems to obey) reality’s demands. Take the black-suited men scaling the building near the movie’s climax like free-floating shadows, or the inelegant rooftop fistfight that morphs abruptly, with a cut down to the combatant’s feet, into a fragile dance, or the “gotcha!” moment early in the film in which the camera scales a tuxedoed Judex’s body from the feet up to reveal a giant stuffed bird’s head perched between his shoulders. There’s nothing worked-over, touched-up, or symbolic about these images; if anything, they’re constantly announcing themselves as direct, falsifiable evidence of how the world actually was at a given time and place. (The shadow-men, for instance, cast shadows themselves.) But if that’s the case, Franju suggests, then reality is stranger, more fantastic, and much closer to fiction than we might often think. Franju is, of course, fooling us, but he has an odd way of going about it. He is always directly exposing the shadows, masks, wires and gears that power his fantasies 46