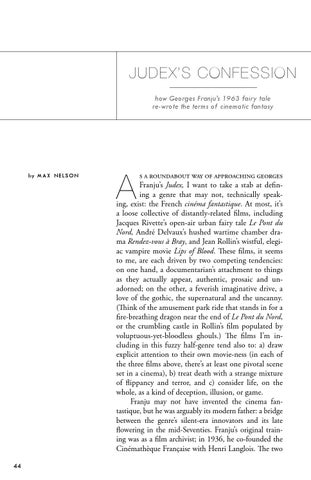 s a roundabout way of approaching georges Franju’s Judex, I want to take a stab at defining a genre that may not, technically speaking, exist: the French cinéma fantastique. At most, it’s a loose collective of distantly-related films, including Jacques Rivette’s open-air urban fairy tale Le Pont du Nord, André Delvaux’s hushed wartime chamber drama Rendez-vous à Bray, and Jean Rollin’s wistful, elegiac vampire movie Lips of Blood. These films, it seems to me, are each driven by two competing tendencies: on one hand, a documentarian’s attachment to things as they actually appear, authentic, prosaic and unadorned; on the other, a feverish imaginative drive, a love of the gothic, the supernatural and the uncanny. (Think of the amusement park ride that stands in for a fire-breathing dragon near the end of Le Pont du Nord, or the crumbling castle in Rollin’s film populated by voluptuous-yet-bloodless ghouls.) The films I’m including in this fuzzy half-genre tend also to: a) draw explicit attention to their own movie-ness (in each of the three films above, there’s at least one pivotal scene set in a cinema), b) treat death with a strange mixture of flippancy and terror, and c) consider life, on the whole, as a kind of deception, illusion, or game. Franju may not have invented the cinema fantastique, but he was arguably its modern father: a bridge between the genre’s silent-era innovators and its late flowering in the mid-Seventies. Franju’s original training was as a film archivist; in 1936, he co-founded the Cinémathèque Française with Henri Langlois. The two