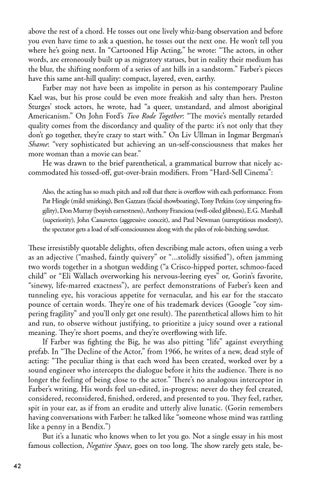 above the rest of a chord. He tosses out one lively whiz-bang observation and before you even have time to ask a question, he tosses out the next one. He won’t tell you where he’s going next. In “Cartooned Hip Acting,” he wrote: “The actors, in other words, are erroneously built up as migratory statues, but in reality their medium has the blur, the shifting nonform of a series of ant hills in a sandstorm.” Farber’s pieces have this same ant-hill quality: compact, layered, even, earthy. Farber may not have been as impolite in person as his contemporary Pauline Kael was, but his prose could be even more freakish and salty than hers. Preston Sturges’ stock actors, he wrote, had “a queer, unstandard, and almost aboriginal Americanism.” On John Ford’s Two Rode Together: “The movie’s mentally retarded quality comes from the discordancy and quality of the parts: it’s not only that they don’t go together, they’re crazy to start with.” On Liv Ullman in Ingmar Bergman’s Shame: “very sophisticated but achieving an un-self-consciousness that makes her more woman than a movie can bear.” He was drawn to the brief parenthetical, a grammatical burrow that nicely accommodated his tossed-off, gut-over-brain modifiers. From “Hard-Sell Cinema”: Also, the acting has so much pitch and roll that there is overflow with each performance. From Pat Hingle (mild smirking), Ben Gazzara (facial showboating), Tony Perkins (coy simpering fragility), Don Murray (boyish earnestness), Anthony Franciosa (well-oiled glibness), E.G. Marshall (superiority), John Cassavetes (aggressive conceit), and Paul Newman (surreptitious modesty), the spectator gets a load of self-consciousness along with the piles of role-bitching sawdust.

These irresistibly quotable delights, often describing male actors, often using a verb as an adjective (“mashed, faintly quivery” or “...stolidly sissified”), often jamming two words together in a shotgun wedding (“a Crisco-hipped porter, schmoo-faced child” or “Eli Wallach overworking his nervous-leering eyes” or, Gorin’s favorite, “sinewy, life-marred exactness”), are perfect demonstrations of Farber’s keen and tunneling eye, his voracious appetite for vernacular, and his ear for the staccato pounce of certain words. They’re one of his trademark devices (Google “coy simpering fragility” and you’ll only get one result). The parenthetical allows him to hit and run, to observe without justifying, to prioritize a juicy sound over a rational meaning. They’re short poems, and they’re overflowing with life. If Farber was fighting the Big, he was also pitting “life” against everything prefab. In “The Decline of the Actor,” from 1966, he writes of a new, dead style of acting: “The peculiar thing is that each word has been created, worked over by a sound engineer who intercepts the dialogue before it hits the audience. There is no longer the feeling of being close to the actor.” There’s no analogous interceptor in Farber’s writing. His words feel un-edited, in-progress; never do they feel created, considered, reconsidered, finished, ordered, and presented to you. They feel, rather, spit in your ear, as if from an erudite and utterly alive lunatic. (Gorin remembers having conversations with Farber: he talked like “someone whose mind was rattling like a penny in a Bendix.”) But it’s a lunatic who knows when to let you go. Not a single essay in his most famous collection, Negative Space, goes on too long. The show rarely gets stale, be42