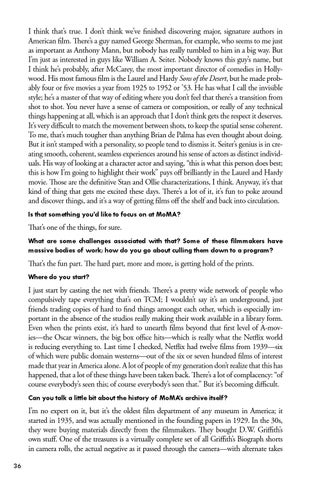 I think that’s true. I don’t think we’ve finished discovering major, signature authors in American film. There’s a guy named George Sherman, for example, who seems to me just as important as Anthony Mann, but nobody has really tumbled to him in a big way. But I’m just as interested in guys like William A. Seiter. Nobody knows this guy’s name, but I think he’s probably, after McCarey, the most important director of comedies in Hollywood. His most famous film is the Laurel and Hardy Sons of the Desert, but he made probably four or five movies a year from 1925 to 1952 or ’53. He has what I call the invisible style; he’s a master of that way of editing where you don’t feel that there’s a transition from shot to shot. You never have a sense of camera or composition, or really of any technical things happening at all, which is an approach that I don’t think gets the respect it deserves. It’s very difficult to match the movement between shots, to keep the spatial sense coherent. To me, that’s much tougher than anything Brian de Palma has even thought about doing. But it isn’t stamped with a personality, so people tend to dismiss it. Seiter’s genius is in creating smooth, coherent, seamless experiences around his sense of actors as distinct individuals. His way of looking at a character actor and saying, “this is what this person does best; this is how I’m going to highlight their work” pays off brilliantly in the Laurel and Hardy movie. Those are the definitive Stan and Ollie characterizations, I think. Anyway, it’s that kind of thing that gets me excited these days. There’s a lot of it, it’s fun to poke around and discover things, and it’s a way of getting films off the shelf and back into circulation. Is that something you’d like to focus on at MoMA?

That’s one of the things, for sure. What are some challenges associated with that? Some of these filmmakers have massive bodies of work; how do you go about culling them down to a program?

That’s the fun part. The hard part, more and more, is getting hold of the prints. Where do you start?

I just start by casting the net with friends. There’s a pretty wide network of people who compulsively tape everything that’s on TCM; I wouldn’t say it’s an underground, just friends trading copies of hard to find things amongst each other, which is especially important in the absence of the studios really making their work available in a library form. Even when the prints exist, it’s hard to unearth films beyond that first level of A-movies—the Oscar winners, the big box office hits—which is really what the Netflix world is reducing everything to. Last time I checked, Netflix had twelve films from 1939—six of which were public domain westerns—out of the six or seven hundred films of interest made that year in America alone. A lot of people of my generation don’t realize that this has happened, that a lot of these things have been taken back. There’s a lot of complacency: “of course everybody’s seen this; of course everybody’s seen that.” But it’s becoming difficult. Can you talk a little bit about the history of MoMA’s archive itself?

I’m no expert on it, but it’s the oldest film department of any museum in America; it started in 1935, and was actually mentioned in the founding papers in 1929. In the 30s, they were buying materials directly from the filmmakers. They bought D.W. Griffith’s own stuff. One of the treasures is a virtually complete set of all Griffith’s Biograph shorts in camera rolls, the actual negative as it passed through the camera—with alternate takes 36