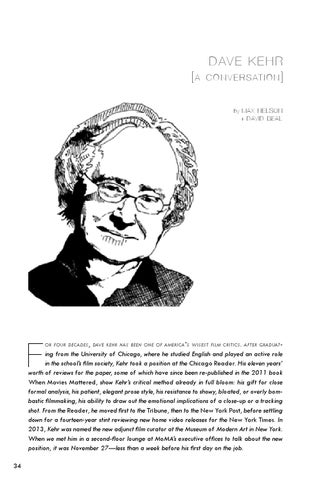 or four decades , dave kehr has been one of america ’ s wisest film critics . after graduat -

ing from the University of Chicago, where he studied English and played an active role in the school’s film society, Kehr took a position at the Chicago Reader. His eleven years’ worth of reviews for the paper, some of which have since been re-published in the 2011 book When Movies Mattered, show Kehr’s critical method already in full bloom: his gift for close formal analysis, his patient, elegant prose style, his resistance to showy, bloated, or overly bombastic filmmaking, his ability to draw out the emotional implications of a close-up or a tracking shot. From the Reader, he moved first to the Tribune, then to the New York Post, before settling down for a fourteen-year stint reviewing new home video releases for the New York Times. In 2013, Kehr was named the new adjunct film curator at the Museum of Modern Art in New York. When we met him in a second-floor lounge at MoMA’s executive offices to talk about the new position, it was November 27—less than a week before his first day on the job.