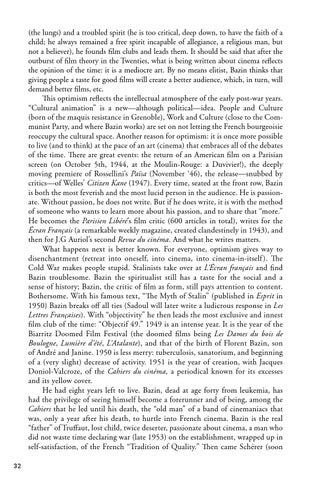 (the lungs) and a troubled spirit (he is too critical, deep down, to have the faith of a child; he always remained a free spirit incapable of allegiance, a religious man, but not a believer), he founds film clubs and leads them. It should be said that after the outburst of film theory in the Twenties, what is being written about cinema reflects the opinion of the time: it is a mediocre art. By no means elitist, Bazin thinks that giving people a taste for good films will create a better audience, which, in turn, will demand better films, etc. This optimism reflects the intellectual atmosphere of the early post-war years. “Cultural animation” is a new—although political—idea. People and Culture (born of the maquis resistance in Grenoble), Work and Culture (close to the Communist Party, and where Bazin works) are set on not letting the French bourgeoisie reoccupy the cultural space. Another reason for optimism: it is once more possible to live (and to think) at the pace of an art (cinema) that embraces all of the debates of the time. There are great events: the return of an American film on a Parisian screen (on October 5th, 1944, at the Moulin-Rouge: a Duvivier!), the deeply moving premiere of Rossellini’s Païsa (November ‘46), the release—snubbed by critics—of Welles’ Citizen Kane (1947). Every time, seated at the front row, Bazin is both the most feverish and the most lucid person in the audience. He is passionate. Without passion, he does not write. But if he does write, it is with the method of someone who wants to learn more about his passion, and to share that “more.” He becomes the Parisien Libéré’s film critic (600 articles in total), writes for the Écran Français (a remarkable weekly magazine, created clandestinely in 1943), and then for J.G Auriol’s second Revue du cinéma. And what he writes matters. What happens next is better known. For everyone, optimism gives way to disenchantment (retreat into oneself, into cinema, into cinema-in-itself ). The Cold War makes people stupid. Stalinists take over at L’Écran français and find Bazin troublesome. Bazin the spiritualist still has a taste for the social and a sense of history; Bazin, the critic of film as form, still pays attention to content. Bothersome. With his famous text, “The Myth of Stalin” (published in Esprit in 1950) Bazin breaks off all ties (Sadoul will later write a ludicrous response in Les Lettres Françaises). With “objectivity” he then leads the most exclusive and innest film club of the time: “Objectif 49.” 1949 is an intense year. It is the year of the Biarritz Doomed Film Festival (the doomed films being Les Dames du bois de Boulogne, Lumière d’été, L’Atalante), and that of the birth of Florent Bazin, son of André and Janine. 1950 is less merry: tuberculosis, sanatorium, and beginning of a (very slight) decrease of activity. 1951 is the year of creation, with Jacques Doniol-Valcroze, of the Cahiers du cinéma, a periodical known for its excesses and its yellow cover. He had eight years left to live. Bazin, dead at age forty from leukemia, has had the privilege of seeing himself become a forerunner and of being, among the Cahiers that he led until his death, the “old man” of a band of cinemaniacs that was, only a year after his death, to hurtle into French cinema. Bazin is the real “father” of Truffaut, lost child, twice deserter, passionate about cinema, a man who did not waste time declaring war (late 1953) on the establishment, wrapped up in self-satisfaction, of the French “Tradition of Quality.” Then came Schérer (soon 32