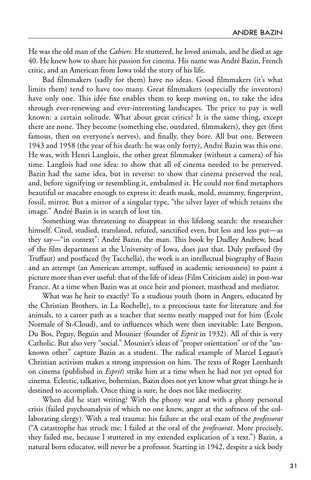 andre bazin He was the old man of the Cahiers. He stuttered, he loved animals, and he died at age 40. He knew how to share his passion for cinema. His name was André Bazin, French critic, and an American from Iowa told the story of his life. Bad filmmakers (sadly for them) have no ideas. Good filmmakers (it’s what limits them) tend to have too many. Great filmmakers (especially the inventors) have only one. This idée fixe enables them to keep moving on, to take the idea through ever-renewing and ever-interesting landscapes. The price to pay is well known: a certain solitude. What about great critics? It is the same thing, except there are none. They become (something else, outdated, filmmakers), they get (first famous, then on everyone’s nerves), and finally, they bore. All but one. Between 1943 and 1958 (the year of his death: he was only forty), André Bazin was this one. He was, with Henri Langlois, the other great filmmaker (without a camera) of his time. Langlois had one idea: to show that all of cinema needed to be preserved. Bazin had the same idea, but in reverse: to show that cinema preserved the real, and, before signifying or resembling it, embalmed it. He could not find metaphors beautiful or macabre enough to express it: death mask, mold, mummy, fingerprint, fossil, mirror. But a mirror of a singular type, “the silver layer of which retains the image.” André Bazin is in search of lost tin. Something was threatening to disappear in this lifelong search: the researcher himself. Cited, studied, translated, refuted, sanctified even, but less and less put—as they say—“in context”: André Bazin, the man. This book by Dudley Andrew, head of the film department at the University of Iowa, does just that. Duly prefaced (by Truffaut) and postfaced (by Tacchella), the work is an intellectual biography of Bazin and an attempt (an American attempt, suffused in academic seriousness) to paint a picture more than ever useful: that of the life of ideas (Film Criticism aisle) in post-war France. At a time when Bazin was at once heir and pioneer, masthead and mediator. What was he heir to exactly? To a studious youth (born in Angers, educated by the Christian Brothers, in La Rochelle), to a precocious taste for literature and for animals, to a career path as a teacher that seems neatly mapped out for him (École Normale of St-Cloud), and to influences which were then inevitable: Late Bergson, Du Bos, Peguy, Beguin and Mounier (founder of Esprit in 1932). All of this is very Catholic. But also very “social.” Mounier’s ideas of “proper orientation” or of the “unknown other” capture Bazin as a student. The radical example of Marcel Legaut’s Christian activism makes a strong impression on him. The texts of Roger Leenhardt on cinema (published in Esprit) strike him at a time when he had not yet opted for cinema. Eclectic, talkative, bohemian, Bazin does not yet know what great things he is destined to accomplish. Once thing is sure, he does not like mediocrity. When did he start writing? With the phony war and with a phony personal crisis (failed psychoanalysis of which no one knew, anger at the softness of the collaborating clergy). With a real trauma: his failure at the oral exam of the professorat (“A catastrophe has struck me: I failed at the oral of the professorat. More precisely, they failed me, because I stuttered in my extended explication of a text.”) Bazin, a natural born educator, will never be a professor. Starting in 1942, despite a sick body 31